That’s what boys are made of! Or so the saying goes.

Dogs and dog walkers had company in the Homeward Bound Memorial Garden today. One of our volunteer gardeners, Sue, brought her grandson along to help her tend to her garden bed and fountain.

As often happens, a “quick trip” became a few hours. It’s easy enough for grown gardeners to lose track of time out here; imagine what a playground this country garden is for a little boy, masquerading as a scarecrow! 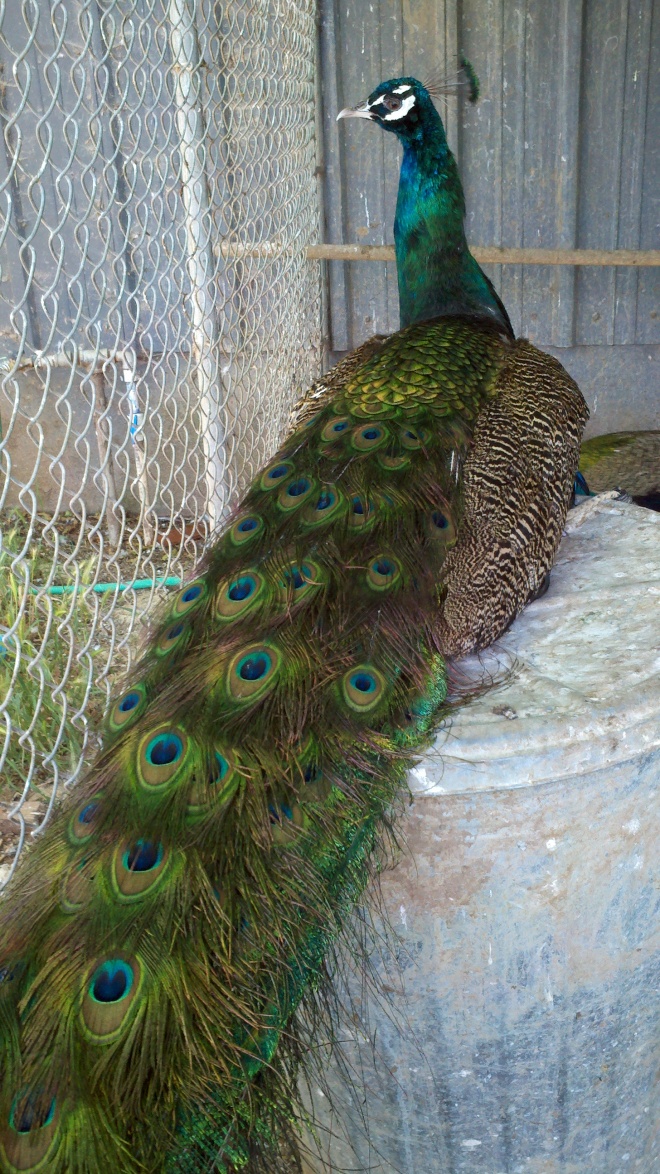 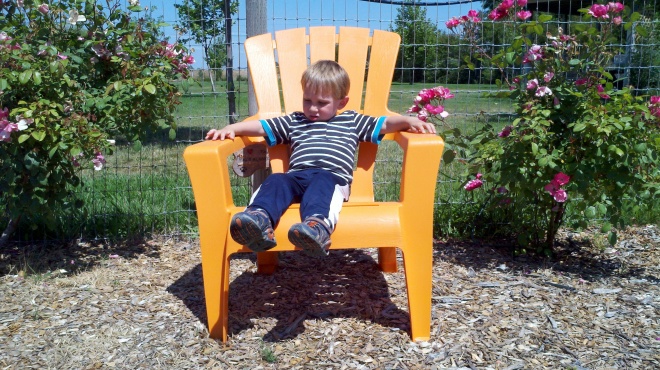 The long holiday weekend meant being able to devote two days to the Homeward Bound Memorial  Garden, working side-by-side with the indefatigable, Maria. 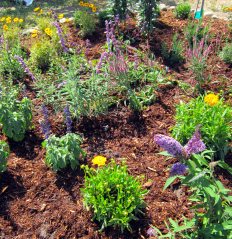 Earlier in the week Anthony (the EMT son of one of our volunteer gardeners) cleared the remaining circle bed and Willow garden.  He did an amazing job of loosening the packed clay soil and removing all traces of weeds. Inspired, planting and mulching the circle garden became the first priority to ensure that his hard work would not go to waste. Newly christened the Hummingbird Garden, it is now filled with Lantana, Asiatic Lily, Verbena, Bee Balm, Salvia, Coreopsis, Red Sage, and a Butterfly Bush, all of which seem to attract more bees than Hummingbirds so far! Everything received a dose of organic soil conditioner and a thick layer of shredded bark mulch to block out any chance that weeds will see the light of day.

Bitten by the same bug, Maria delivered a couple car loads of plants to her Bed Garden and Whimsy Garden – now taking shape as an Herb Garden.  Her sunflowers are about waist-high now and beginning to bud. Every time we turn around, they seem to have grown another six inches. Between plantings she managed to attack weeds under the Grape vines and around the beds, while I fed and deep-soaked the roses which take a lot of abuse in the hot sun and wind of this country garden.

Joanne, a cheery dog-walker volunteer, made her way into the garden with one of her dog wards.  We quickly surmised that she had more garden knowledge than she professes, and when she said that she didn’t mind weeding, we put her to work. Unexpectedly enlisted, she managed to clear half of Sue’s garden before she had to leave.  We thickly mulched it to ward off their return.  Hopefully, we didn’t scare Joanne off and she will return for more! We are always in search of dedicated dog and garden lovers!

A beautiful Golden Retriever topiary now graces Jody’s garden, and will soon be covered with a vigorous Creeping Fig Vine.  She continues to bring shrubs and perennials weekly and each find their place as the bed takes shape.

Plans were made for the delivery of stone to create a simple patio laid in the earth under the shade of the fruit trees, and a pathway in the newly cleared willow garden, setting the stage for an Asian-inspired bed.

Thanks to Dick, the table that we planned to use under the trees was rescued and reconstructed when it literally fell to pieces as I attempted to move it. Dick was also gracious enough to replace the shovel I broke in the clay soil. There will soon be an entire crew dedicated to repairing all that I touch.

Dick and his volunteer crew are kept constantly busy building, repairing and maintaining all in support of Homeward Bound and its mission to rescue displaced, abandoned and homeless Golden Retrievers and their Golden+ mix friends.  The hard work is gratifying as you are constantly surrounded by the rewards of your efforts; like the three-legged Golden, happily chasing a tennis ball this weekend. These dogs have such enormous hearts and spirit. They spur us on.

Updated pictures follow for all that track our progress turning a patch of hard clay country earth into a Memorial Garden for Homeward Bound. 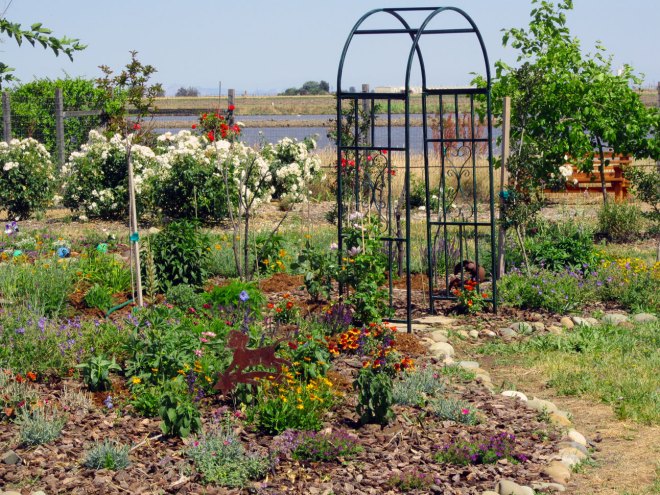 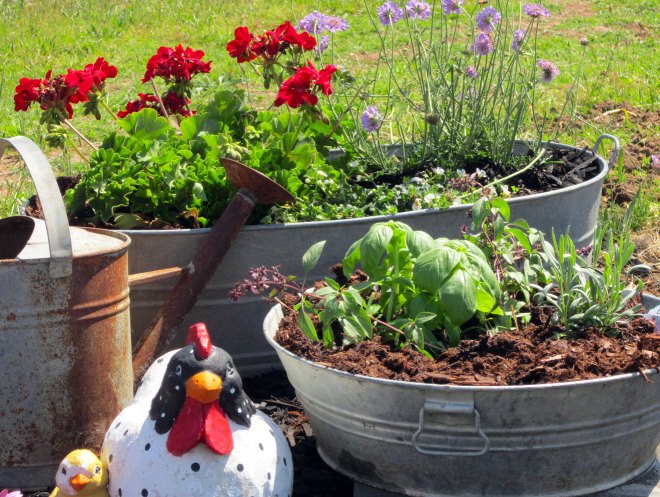 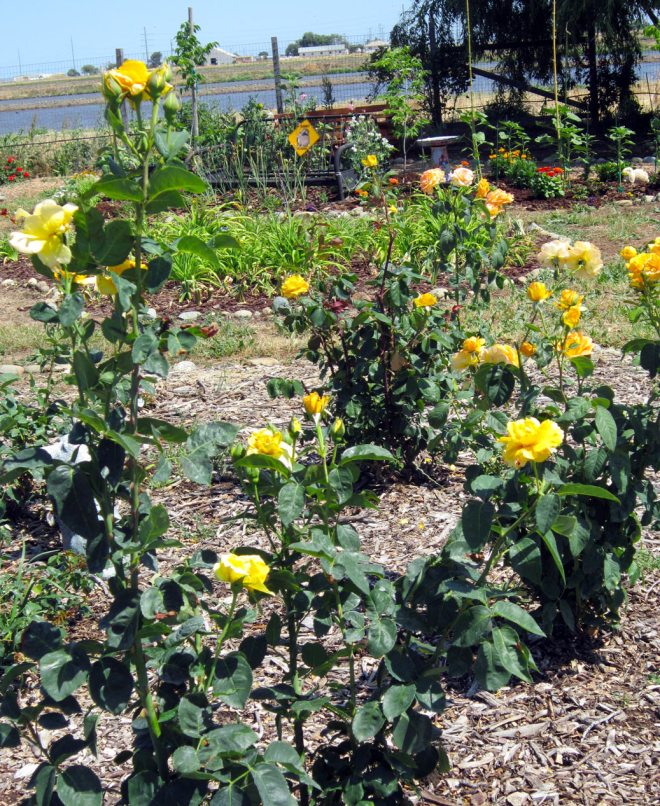 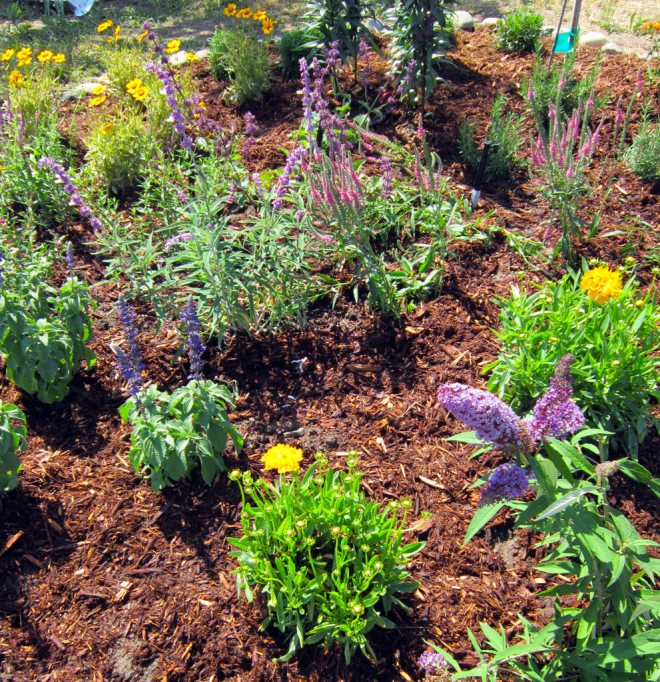 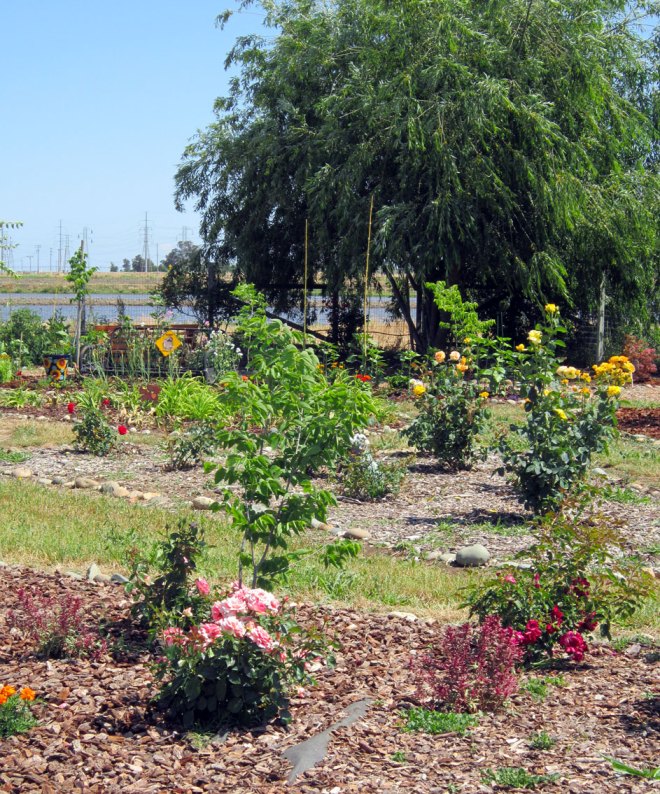 The bunny crossing sign in Maria’s Garden is apt. While I’m not quick enough on the draw to capture them, Jack Rabbits have been spotted daily on the other side of the fence that separates the Homeward Bound Memorial Garden from a rice field. Today, bunny rabbits were spotted in the garden! They were last seen making their way to a thicket of raspberry bushes that remains on our “to-do” list.

The Killdeer bird has taken up residence again in Vonnie and Randy’s Butterfly Garden. I think she is getting used to us now. She no longer feels compelled to distract us with her “broken wing” display; a sharp trill suffices. Yes, we see you mama.

Sue found another snake in her garden this morning – and after it, its skin. We were grateful that it did not hang around for our meeting following the Pancake Breakfast Fundraiser. Perhaps it took up residence with the bunny in the raspberries. With doggy day-care available to all who attended the breakfast, the creatures having the most fun in the gardens this morning were previously rescued alumni Golden Retrievers and their Golden friends.  Many more fun pictures on the Homeward Bound Facebook Page if you want a smile. 🙂

Every once in awhile you have to take a look back to see how far you’ve come – especially when all you see around you is more to do.  So here is a little “before and after” of the Homeward Bound Memorial Garden, thanks to our volunteer gardeners.

I spent a wonderful, if warm, afternoon in the Homeward Bound Memorial Garden. The 2nd Annual Pancake Breakfast fundraiser takes place there tomorrow, and everything was being spruced up for the event – including the garden. The paths received a close haircut – even those patches that require the extra effort of the weed whacker. The “to be disposed of” pile had been disposed of, and the beds are looking great.

Deb’s Dahlias are just beginning to poke through. She installed branches for support that add grace and just the right touch in a country garden. I planted some Sage in the back side of our bed to anchor it visually and provide height and beautiful late fall purple spikes long after the Dahlias have faded. Some Nepeta and annuals fill in the holes left by spring bulbs and blooms: Cosmos, Zinnia and Black-Eyed Susan. The more space we can fill, the less room for weeds!

Maria added a Honeysuckle vine and some potted flowers to the Whimsy Garden, while her Sunflowers reach for the sky in the Bed Garden.

Vonnie and Randy’s Butterfly Garden is newly planted, while the flowers in Sue’s Circle Garden are creating quite a colorful show. Her little creatures make me smile.

Ina’a Cottage Garden is thriving under a heavy layer of mulch and with the new drip irrigation installed.

The biggest surprise was Jody’s bed; now completely covered in bark to keep the weeds at bay, and filling up with shrubs that will add structure year-round. She heard that I threatened not to return until the bark was completed. I’m not sure where the rumor started, but I have to admit that I like the result.

The Garden looks ready for guests tomorrow; our volunteer gardeners should be proud of their efforts. Everything seems to be finding its home – including another lucky Golden Retriever that was adopted today. There is nothing more rewarding than working in the garden while a family gets to know – and love – a soon-to-be adopted Golden in the adjacent yard. What a great way to spend a weekend afternoon.

Sometimes you just have to get your garden fix in unexpected places. I missed the Homeward Bound gardens last weekend to travel to Las Vegas for a birthday celebration. I saw a whole lot of concrete and neon, but few trees or flowers until I made my way to the Bellagio Conservatory and Botanical Garden where my need for green was satisfied.

While brilliance abounds, a closer look reveals that this is a display – not a true garden. Each and every plant is in a container that is no doubt quickly removed when it loses its luster. 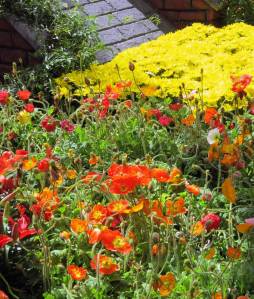 At the Homeward Bound Memorial Garden, we don’t have the luxury – or the desire – to discard less than perfect plants. We rescue and nurture – just as Homeward Bound rescues, nurtures and places hundreds of dogs each year.

The Bellagio “garden” is certainly spectacular and worth spending time in – especially when you get tired of the chaos of Vegas. Still, it cannot hold a candle to the joy of our country garden where good things grow and develop over time from the earth. I will happily return this weekend.

The Dahlias were planted; the drip system is being fine-tuned; I hear the sunflowers are growing like weeds; and I imagine the weeds are growing like weeds as well! Rumor has it that a new shovel was graciously donated after my last clay-digging mishap. I’ll be sure to bring my own and steer clear of it! Something tells me the gardeners will appreciate that. We hope to see  all of them on Sunday after the Pancake Breakfast.

Is it the weekend yet?

I have been responsible for the death of more than a few plants in the garden. However, this is my first shovel victim. Clay. Enough said.

At the Homeward Bound Memorial Garden, I am happy to provide whatever help I can to Jody and her garden bed. At approximately 500 square feet – it is a huge undertaking for this dedicated co-founder of a recognized Golden Retriever Rescue and Sanctuary just outside of Sacramento, CA.

I am a planner by nature.  In the garden, I have been known to stare at an empty site for hours/days/weeks until it becomes clear what belongs there. To me, it is the artist’s or writer’s equivalent of a blank canvas or piece of paper.  And like writer’s block, a garden can take a very long time to reveal itself to me.

Jody, on the other hand, has a very different approach. Weekly she appears in the garden with another plant or two. Something she has rescued, resuscitated, or pulled from a picked-over sale bin somewhere. “You’ll find a place for them,” she says with a smile, before she departs.

This attitude is at the heart of an amazing organization which is responsible for the rescue of hundreds of dogs each year. From a small office, kennel and a few pens has grown a sprawling sanctuary with enclosed fields where the dogs can play, swim, and frolic as dogs do. Pulled from shelters, surrendered by owners who can no longer care for them, they are the lucky rescues, and there always seems to be “a place” for just one more at Homeward Bound.

The Homeward Bound Sanctuary serves as a “half-way house” for Goldens awaiting adoption, and as a permanent home for those dogs whose health issues have rendered them unadoptable. They are welcome to live out their lives at the sanctuary in security and dignity, surrounded by love. Just like Jody’s pretty patchwork of a garden. Sprouting weekly from a long stretch of soil; a place where any rescued plant is welcome to make this garden its new home. No plan required.

The Homeward Bound Memorial Garden, honoring our beloved Golden Retriever (and other!) friends, is fast becoming a garden worthy of the memories planted here. 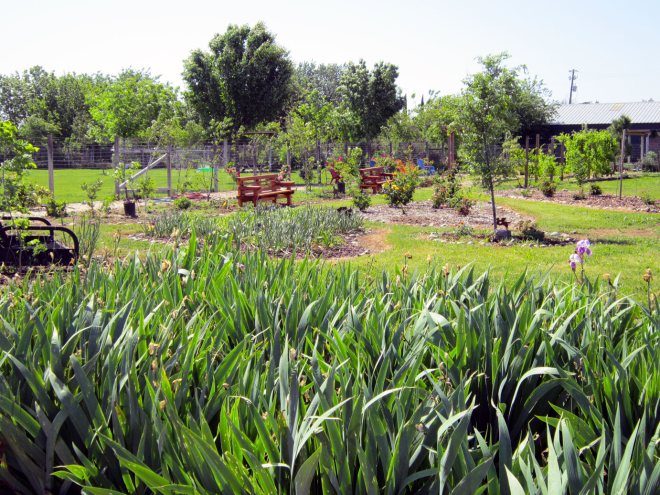 A place that welcomes dogs and dog walkers. 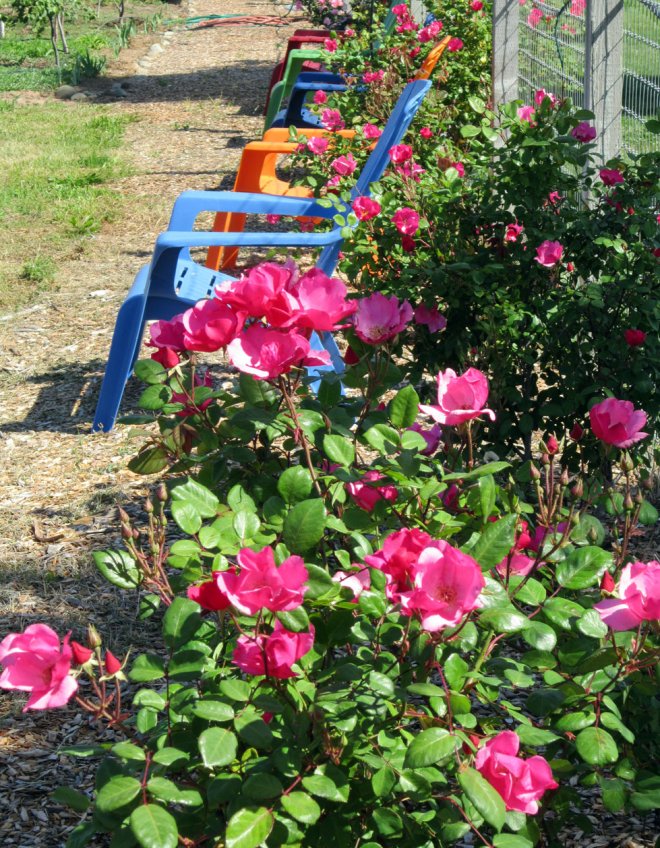 Our labor of love…

for gardens and Goldens.