Given that our Memorial Garden was under water just a week ago, I was surprised and amazed to find it beginning to bud and bloom.

It seems impossible that the bulbs, plants and trees survived submersion for so long and still pushed forward to beckon spring.

Mother Nature is nothing if not persistent. She has her limits, mind you, but a plant’s purpose is to go forth and produce the leaves from which it feeds and seeds it sows to ensure its future. 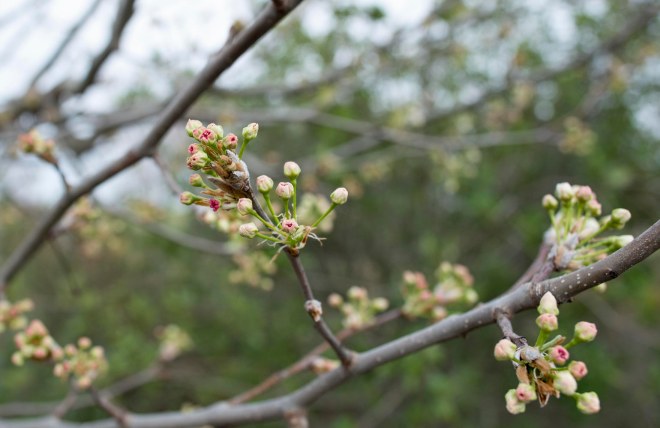 “The greatest oak was once a little nut who held its ground.” ~ Author Unknown

It’s an important reminder. When obstacles block our path and threaten what we believe to be right, fair, and true to our purpose – like nature – we need to adapt until we find our way beyond the barrier.

It means taking collective and personal responsibility, even when the going is tough.

It means standing up for what is right.

Life is full of impediments and hurdles – persistence and personal responsibility are the tools required to clear them.

“You cannot change the circumstances, the seasons, or the wind, but you can change yourself.” ~ Jim Rohn

We can find a way. 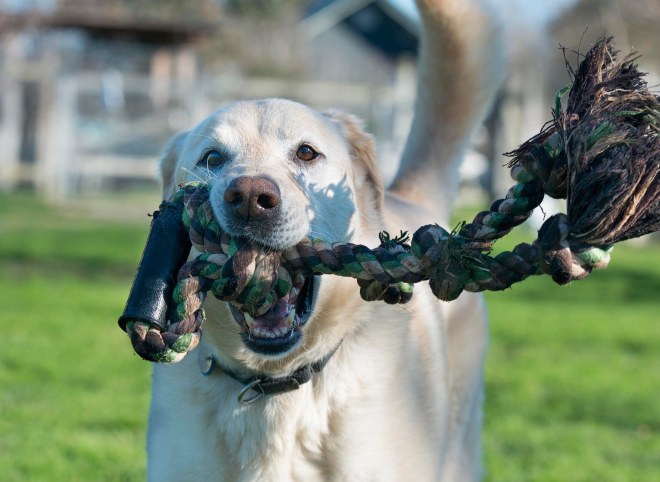 The little girl renamed Moose, the Doodle, Clifford – after the Big Red Dog. 🙂 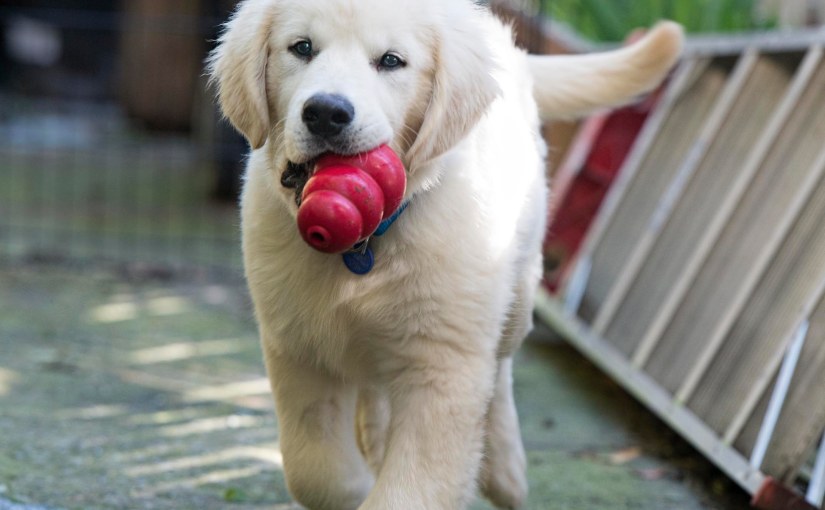 When our Jackson picked Yogi out for adoption last fall, I sometimes thought our Bella had been reincarnated in him.

The way he cuddles, paws you for pets, refuses to be ignored, hogs the bed, and enjoys gardening with me were wonderfully familiar. But he was definitely his own dog and a bit of a project one at that. On our first few walks, I wondered what I had gotten myself into when he reacted very negatively to select dogs passing by. I’m not kidding. Four paws came off the ground with ferocious barking. It wasn’t aggression. It was insecurity. When he wasn’t doing that – he was hugging my leg for dear life.

Bella was not great with other dogs. As long as we kept our distance, she was OK, but bringing a dog into the house was too much for her. Which meant that fostering – of all but little puppies – was out of the question.

I began working with Yogi immediately. Working on positive association (“look Yogi, nice dog!” / sit / treat) and gradually introducing him to friendly neighbor dogs. When friends came by with dogs unannounced and marched into the house to tail-wagging welcomes, I knew we had made progress. When Rush stayed with us, and Yogi welcomed him so warmly, I knew the progress was good.

Last Sunday night, when concerns at the Oroville Dam about an hour away forced the evacuation of surrounding communities, we made a decision to move the rescue’s friendliest dogs to foster and prepared to evacuate the rest if the call came. So, when my husband and I loaded two five-month-old puppies and two 11-year old Goldens into the car, I admit to saying a little prayer that Yogi would be a good boy. And what a good boy he was.

I knew the puppies would not be a concern; he loved them instantly. 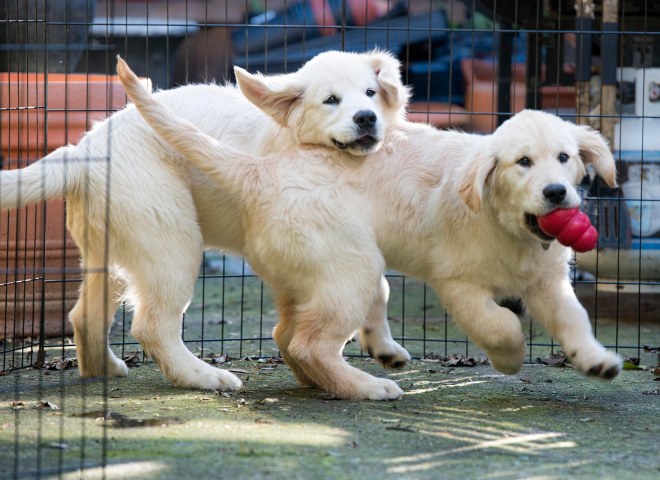 While Jackson just rolled his eyes and moved to the back room, Yogi wanted to jump into their little area and start the play!

I kept the big boys separated at first. But after a day, they all decided: enough of that. 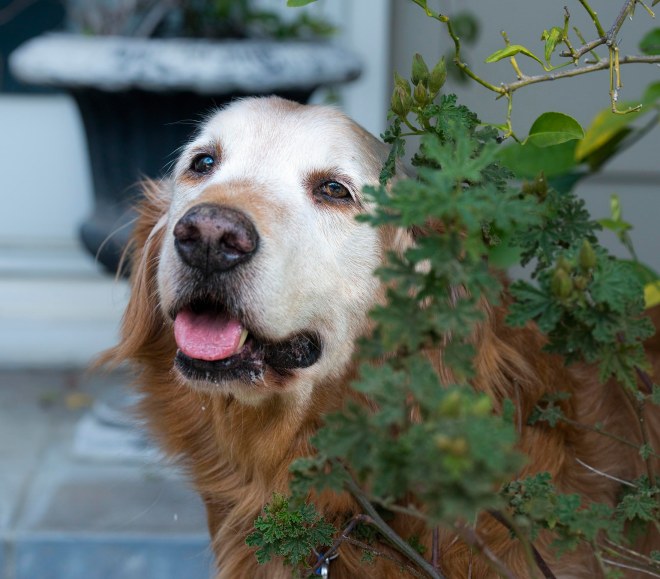 And for the rest of the time that Felix and Max stayed with us, everyone was together. Have you ever tried to sleep with four snoring dogs?

Meanwhile, the puppies needed exhausting: Yogi to the rescue! 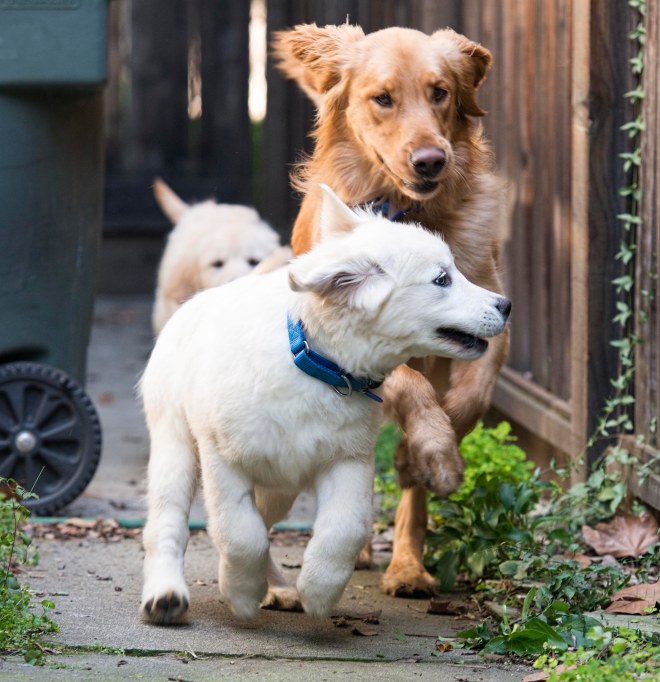 I’m so proud of this boy. Somewhere along the way, my insecure wildebeest became the kind of dog that would roll out the welcome mat to a dog in need. 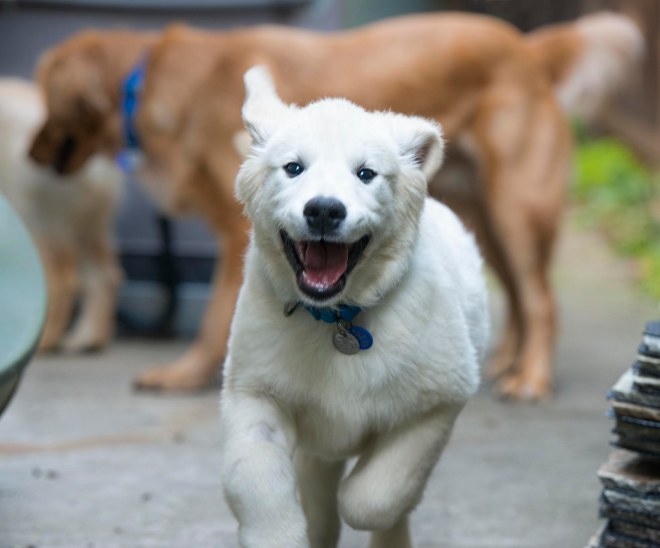 We have another big storm bearing down on us and our water-logged levees.
Our emergency plan is tested and ready.
And my houseful of boys has been a lot of work – but an absolute delight. 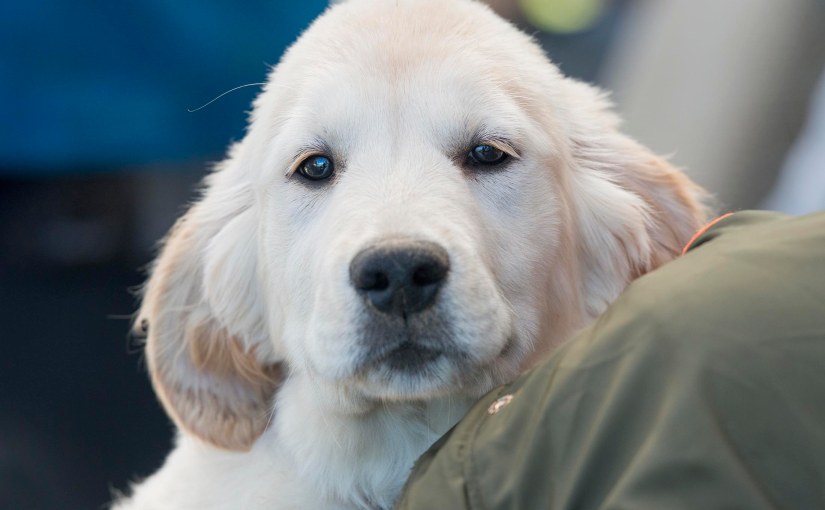 These are the irrefutable truths of puppies in the rainy season.
1. Mud and poo are indistinguishable.

2. The dirtier the puppy, the more aerodynamic.

4. Towels are not for bathing; they are for playing. 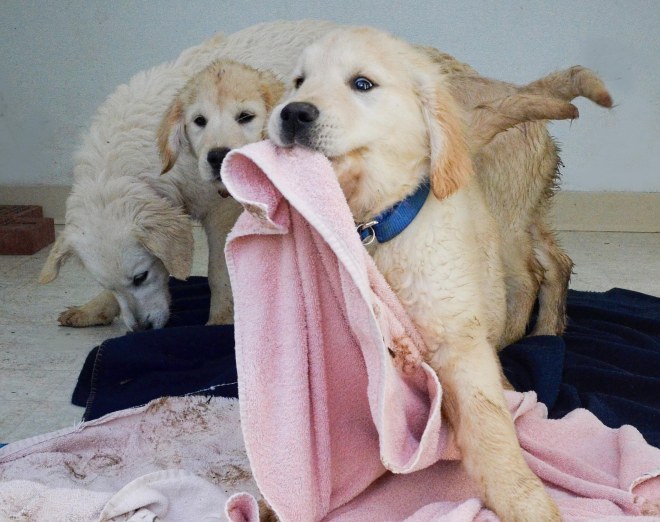 6. Pockets are for picking. 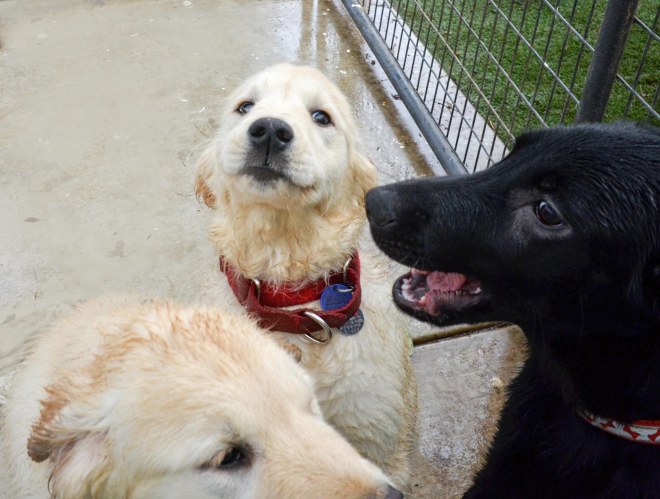 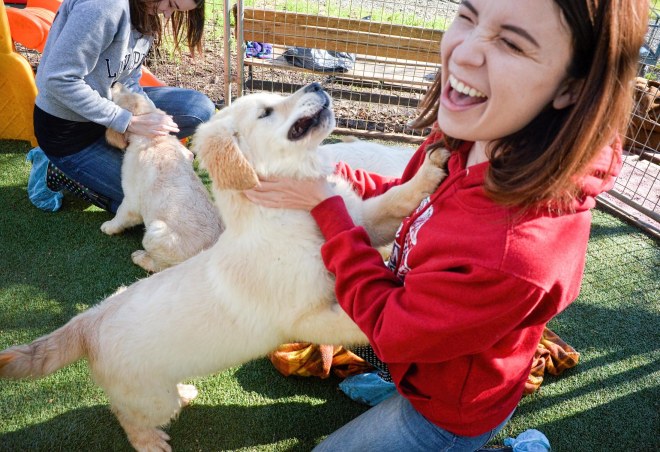 8. And saying goodbye is so very hard to do.

Happy life, Cici! See you at the Reunion Picnic in May! 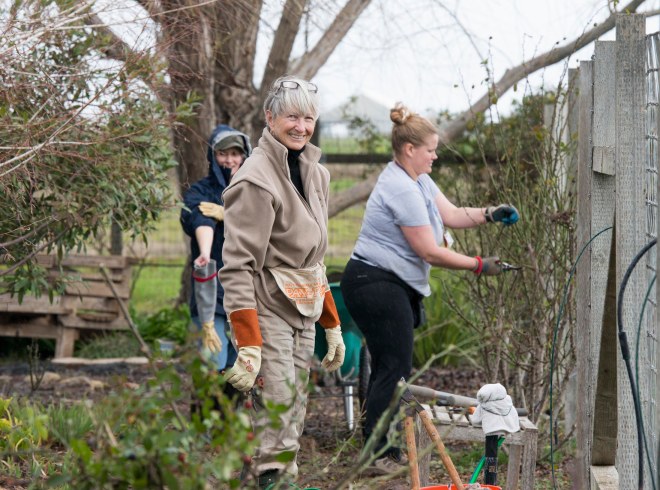 We prune to encourage new growth in the spring. It’s an art and a science. And while roses are pretty resilient, you still take great care because, sometimes, you can go too far.

In December, odd couple Cody and Rusty arrived. We nicknamed Rusty, Toto, for his resemblance to Dorothy’s little friend. 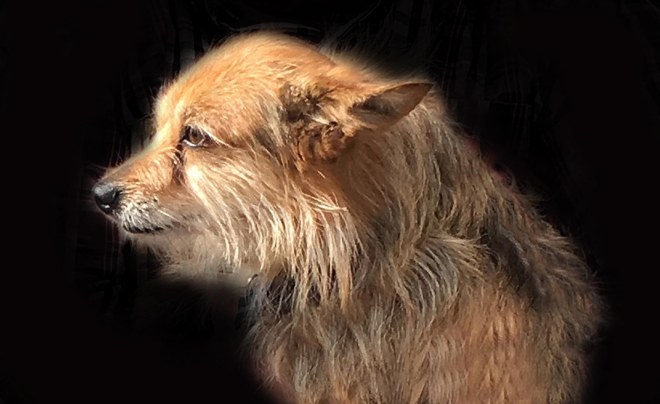 Surrendered when the wife developed allergies, they were inseparable. It was easy to know. On the rare occasion that they were briefly apart, Rusty let out blood-curdling screams that sent all of us running to investigate.

We work very hard to keep bonded pairs together. Like our mud-covered friends, Toby and Noel who went home together this weekend. 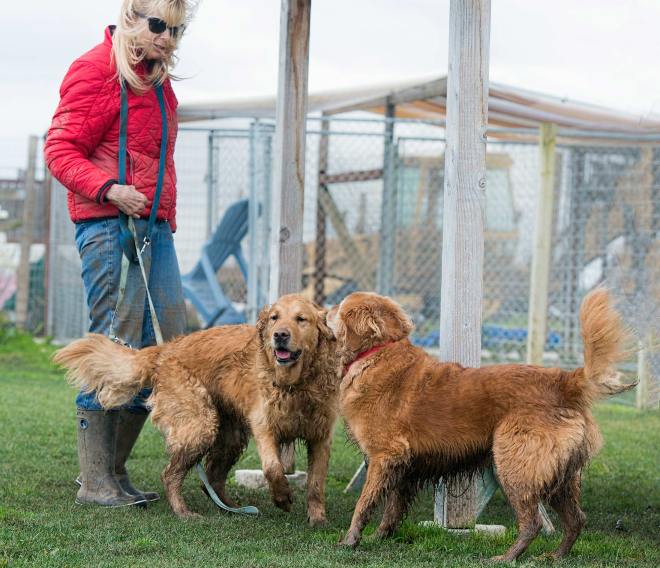 Still, the odds of finding one home for this mismatched pair were slim – to none? When a family fell in love with little Rusty, we reluctantly gave our OK, knowing that it would dramatically improve Cody’s odds. As it did. He was adopted very shortly after.

But then Rusty came back. He was miserable without his buddy and screeching for him incessantly. When a call was placed to Cody’s new family to inquire – might they, would they, could they be interested in adopting Rusty, too? – the response was “actually, we’re not sure Cody is such a great fit, either. Maybe they should be together.”

Cody was returned Saturday morning – rejoined with his beloved Rusty to squeals of joy. We had pruned too far.

Nature knows what is needed. You just have to use care and have faith. Which is why, not a half hour after Cody was returned, a wonderful couple arrived in search of a pair; a Golden, and a lap dog. What are the odds? They said ‘yes’ to Cody…and Toto, too!

While their new family grew larger, our roses grew smaller. 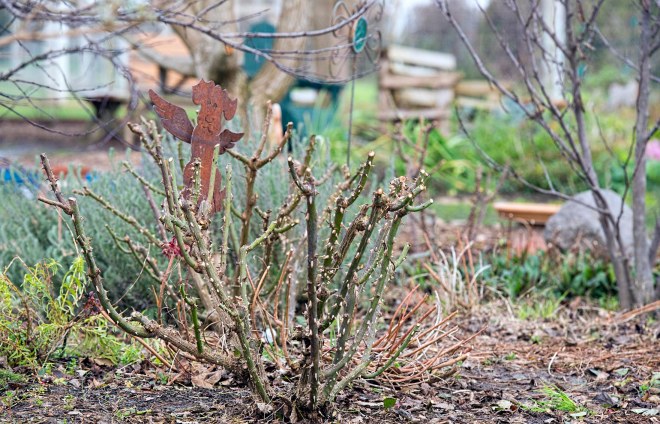 Six gardeners with clippers and one relentless man with a wheelbarrow managed to prune over 100 roses in the Memorial Garden. 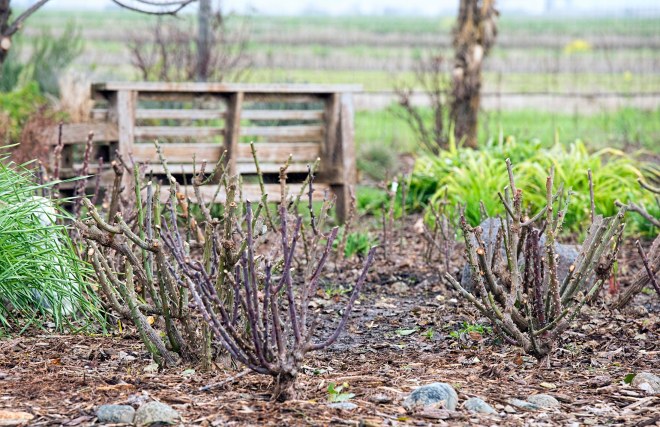 And just in the nick of time. The Daffodils, Hyacinth, Narcissus and Rosemary signal: spring is near. 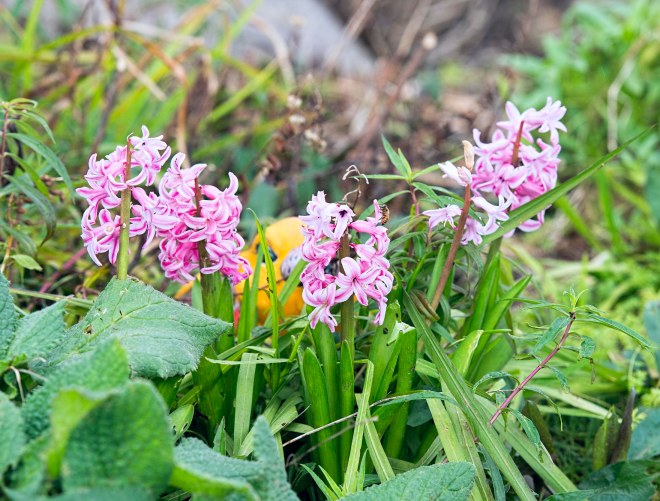 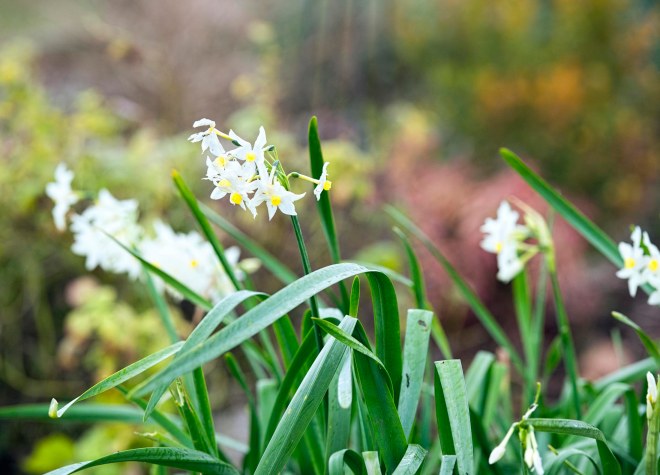 But Cody and Rusty could have told you that. Their new season has already arrived. Happy lives, you two! 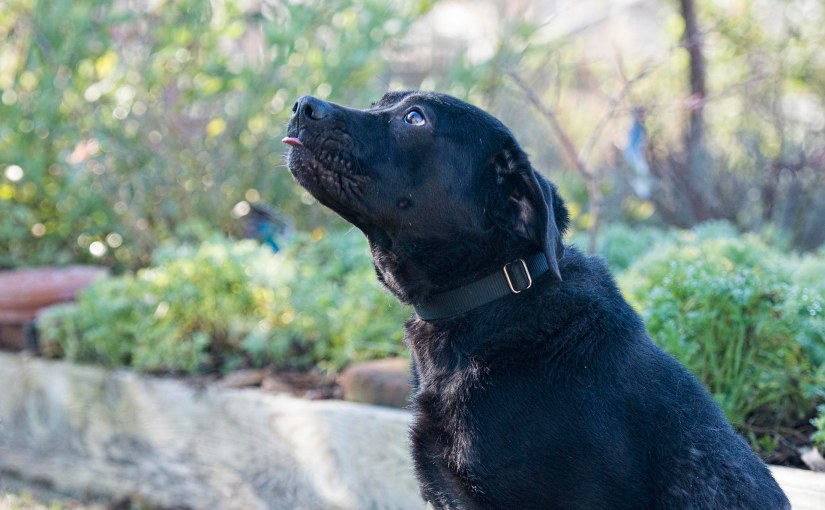 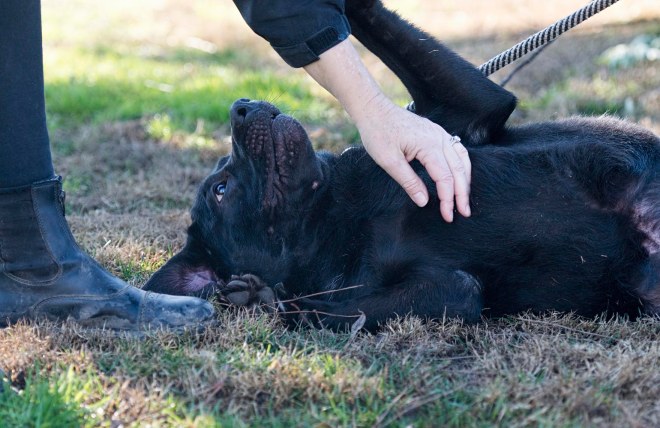 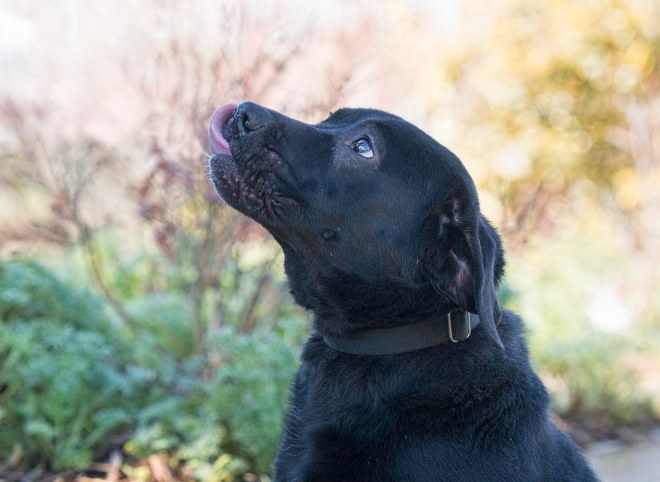 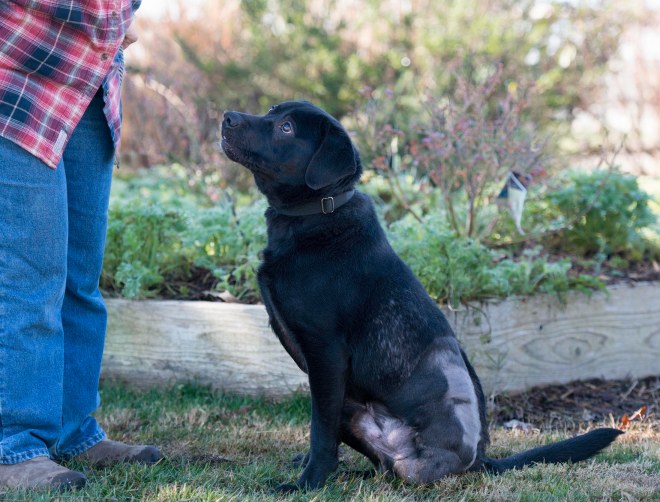