Who says that we don’t get paid at an all-volunteer rescue? Remember my subjects from Puppy Truths?

Cici was adopted right away,

but you might recall that two of them, Timmy and Wyatt, came home with us for a bit last winter when we thought the rains and flooding would never quit.

My Yogi was happy to keep the little monsters company. 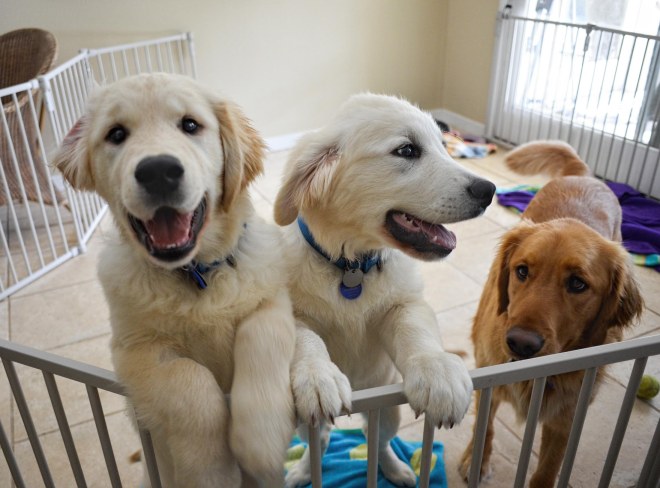 It’s still unclear who the bigger puppy was!

Recently, all three returned to Homeward Bound for a reunion.

It’s one of the bonuses for our unpaid work: welcoming back our charges to see what kind of canine citizens they have become.

And look how they have grown! 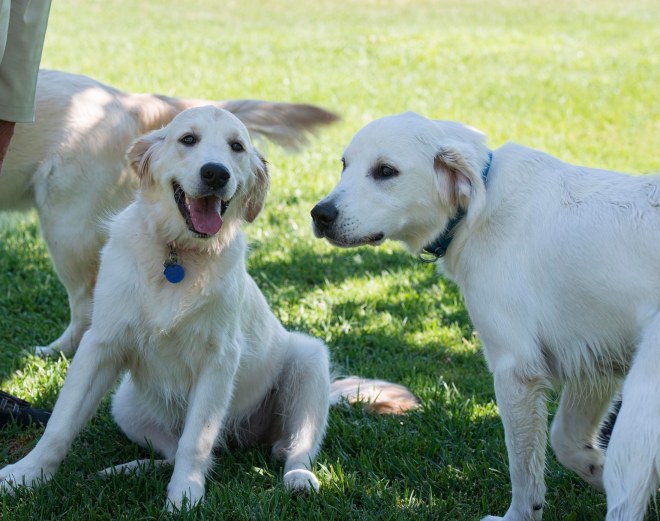 At almost 10 months now, they are still full of spit and vinegar… 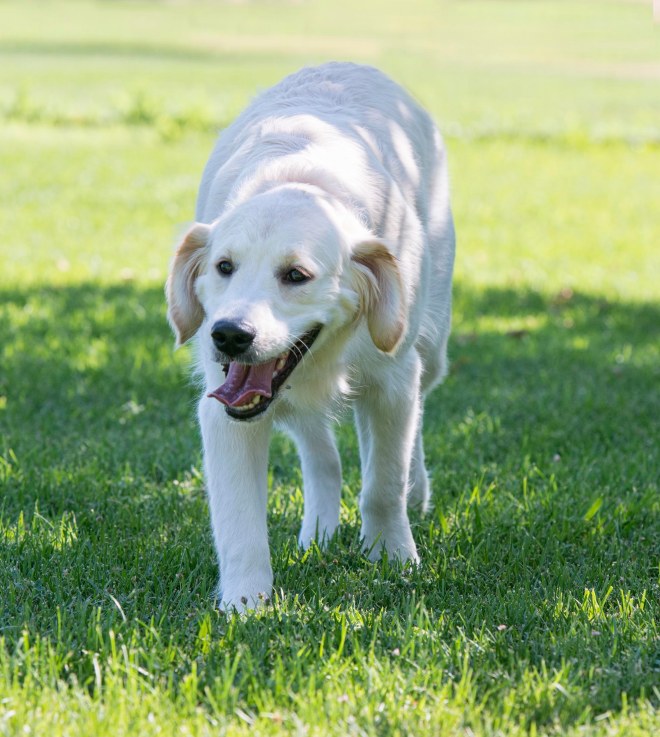 and when you yell “Puppy, puppy, puppy!” they still come running! 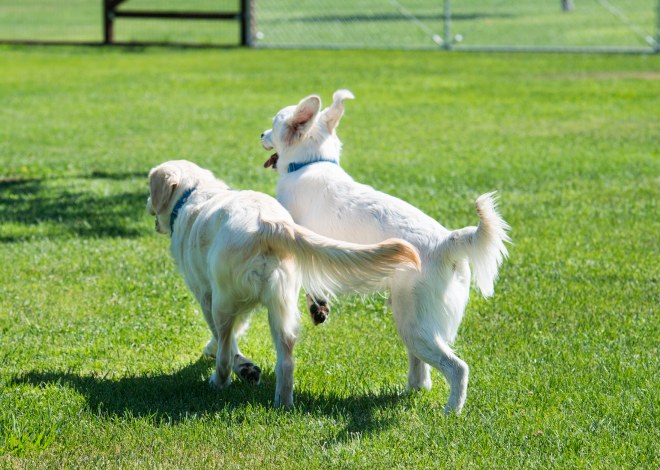 Cici is Angel now, and Wyatt is Elvis (it suits him!). But Timmy is still Timmy – through and through.

They were surrendered to us because each had low-level heart murmurs – small enough not to change their quality of life or longevity – but just enough that three lucky families got to call them their own. 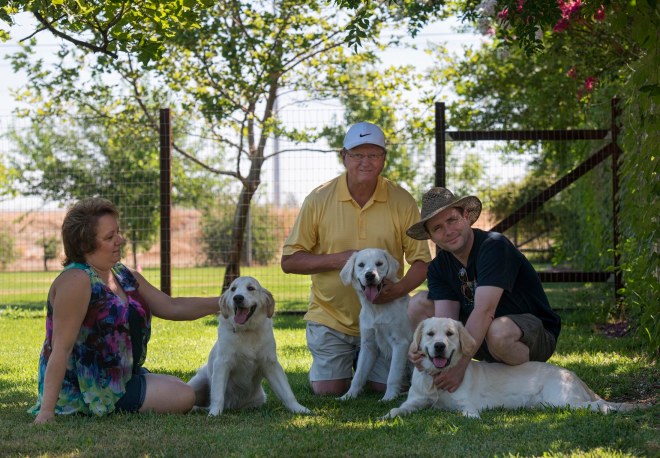 Lucky people.
Lucky puppies.
Lucky me for the chance to spend time with them. 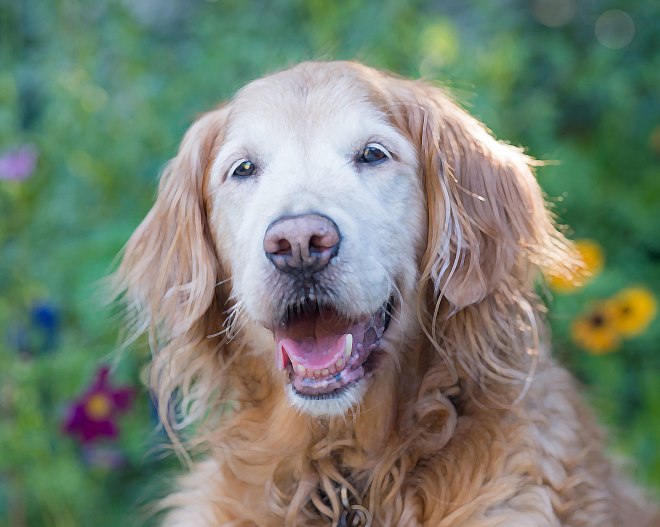 Your barking at dog photos I am editing on the computer or videos on TV.
Chasing those TV dogs around the back of the set to see where they go.
Not having to get up every five minutes to retrieve the tennis ball that my beloved retriever purposefully rolled under the furniture (fetch is for humans, too, I guess).

Your schedule of demands beginning with breakfast barks and followed by lunch cookie barks, dinner barks, and bedtime treat barks.
Your refusal to be shut out of any room – ever – including the bathroom.
Your sneaky counter surfing. (No, I am not believing it was Jackson.)
Your love of butter wrappers.
Tug of war with Jackson (you always let the Little Man win).
Your sleeping body always under foot.

Your presence in the garden.
Endlessly pulling sticks, bark, and dirt clods from your mouth.
Holes in the drywall (I left one unpatched to remember you by).

Curling up with Daddy on the sofa.
Crawling into my side of the bed.
Your snoring.

Your sweet sugar face.
Your long, beautiful lashes.
Your fuzzy paws.
Your soft curls.
You.

I cannot believe it has been a year.
Not a day goes by that I do not say good morning and goodnight to your photo.
I still cry when I think of you.
But now I can smile, too.

“Amelia is loose at Lake Tahoe. Can you post for help?” Amelia is a six-year-old “English Cream” Golden Retriever and retired breeder dog. And not from a responsible breeder. We see too many of them. They have spent their whole lives living outdoors and making puppies. They arrive shut down, fearful, and unsocialized. They connect with other dogs, but not quickly or easily with most humans. It can take weeks, months, and in some cases, years for them to overcome their past experiences.

Amelia had been adopted just five days prior. Sometimes, when people fall in love with a dog, they listen only with the hearts. They underestimate what they are reading in the file, being told, and even seeing before them. They are in love. But you could see it in Amelia’s face on her adoption day.

She was going to need a lot of time and TLC before she would trust.

Given a momentary open door before being leashed – Amelia took off. On one side was heavily wooded and mountainous terrain populated by cougars, coyotes, snakes, and bears. On the other side: a very busy highway. The date: just a week before the July 4th fireworks when an already spooked dog could be scared into even further harm. The longer she was out, the greater the risk.

The word spread like wildfire. Local shelters, vets, online sites, road crews, and community members were alerted. A team of dedicated Homeward Bound volunteers was assembled. We’re family. And when one of us goes missing, we kick into high gear.

We were blessed to have local volunteers who knew the terrain and the challenges. One, Mike, had been on the hunt for Murphy, the dog that disappeared into the Tahoe National Forest in 2012. Incredibly, she turned up at a campground 20 months later. A miracle: that’s what we needed for Amelia.

They set out blankets with her smell, cooked bacon to attract her, and left tempting meaty treats in a humane dog trap. But all they attracted were other animals. Sightings would be reported early in the mornings, but as soon as she saw people, she would flee. This went on for a week of 17 hour search days while overnight temperatures dropped to the low 30’s. As the 4th of July grew closer, the nights colder, and the Tahoe roads more crowded with tourists, her situation was becoming desperate.

Amelia’s social media post reached more than 40,000 people. But here’s the thing: it only takes one. The one special person we connected to was a proven dog trapper who had returned over 50 dogs. And he lived just minutes from Homeward Bound. Brian volunteered his time, trap, and secret lure (puppy chow), and made his way to Tahoe to share his expertise just as hope was waning. It had been two days since Amelia was last sighted.

A couple days after Brian’s visit, Mike and Charley got up before dawn.They set the trap  in the area where Amelia was last spotted, filled it with the puppy chow and left to wait from a distance to avoid spooking her. As they drove down the road, Mike spied Ameila peaking out behind a pile of logs. They pulled over. She skulked by them warily looking right at them. With all the patience they could muster, they held still, waited and watched as she made her way in the direction of the trap. After what seemed like an eternity, they went to check. And there she was! 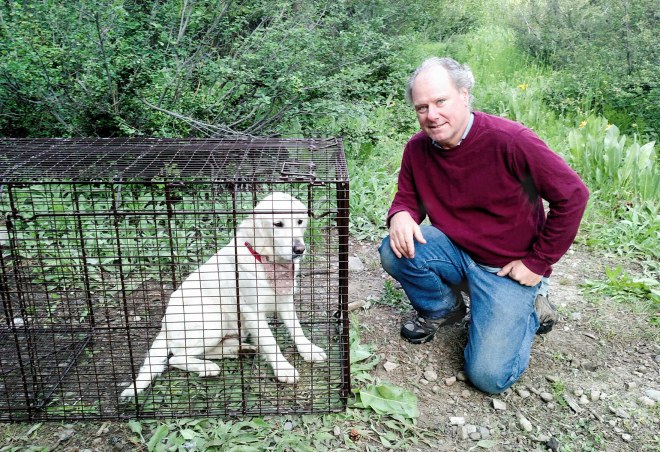 Before 7 AM on July 3rd, the word went out: Amelia is found! She was thin and dirty, but in surprisingly good shape given her ordeal.

Her rescue team surrounded her with their dogs knowing that would give her comfort, and within hours, they returned triumphantly to Homeward Bound.

Amelia was excited and comfortable in the company of her dog friends. 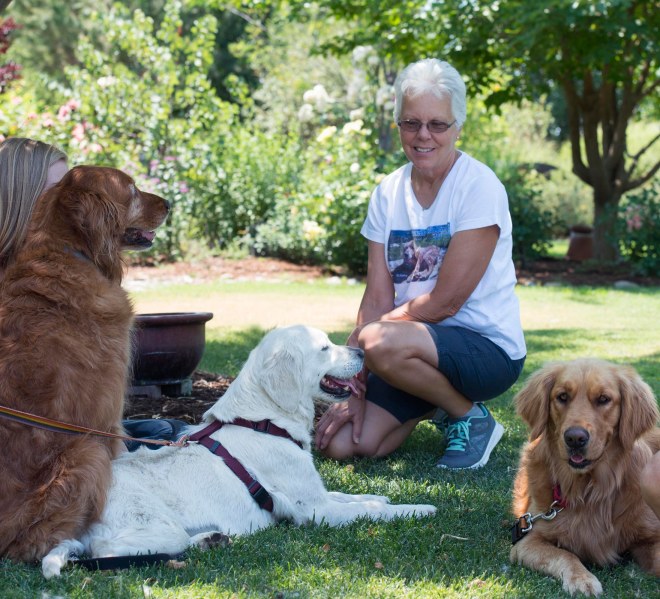 The usually standoffish girl seem to recognize that these – her rescuers – were good, trustworthy people.

After a bath and a meal, exhaustion set in. 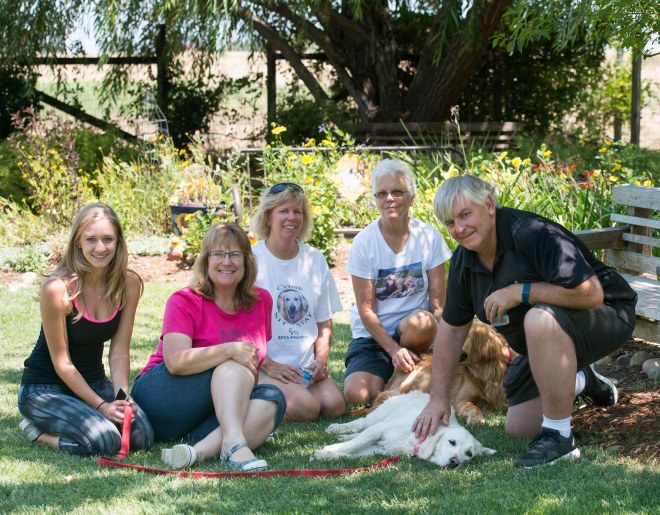 Understanding that Amelia’s needs were greater than first believed, she was returned to our care. Our only question was: which of her rescuers would become her forever family? None wanted to let her out of their sight again.

Jana was part of her search team and has been a volunteer with Homeward Bound since the beginning. She had lost her beloved McKinley not long ago and had adopted Trixie – another shy girl who was rapidly gaining confidence – and regaining her health – with Jana’s loving care. Jana had planned to adopt a friend for Trixie when she returned from her previously scheduled two-week trip.

And so it was agreed. Amelia stayed with us for a bit where she could be under watchful eyes and close to our vet given her ordeal until Jana returned.

And we have a pretty good feeling they are going to be very good for each other. 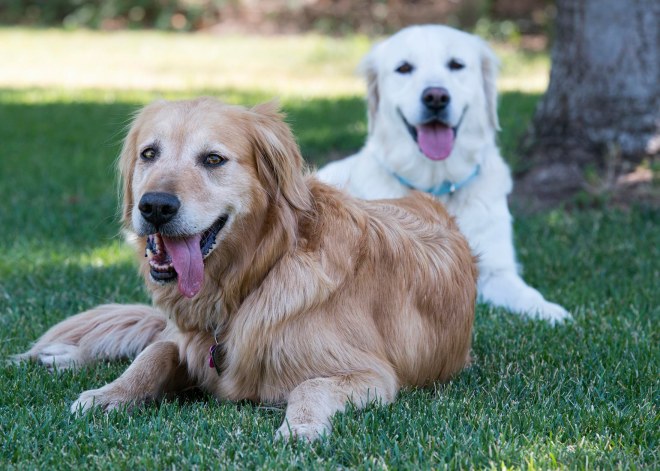 Happy life, Amelia. It’s been a long road – but you are home. 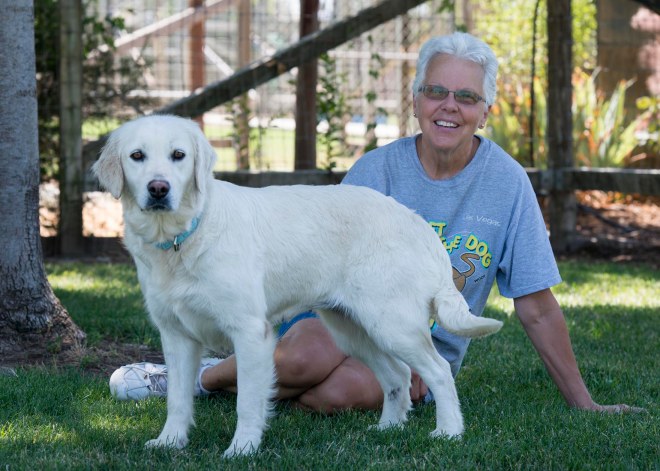 While we are grateful to all that joined the effort, these individuals went way above and beyond: Mike Stram, Deb Safford, Denise and Charlie Lohner, Jana Hook, Gina Heise, and Brian Burke, the tracking expert. 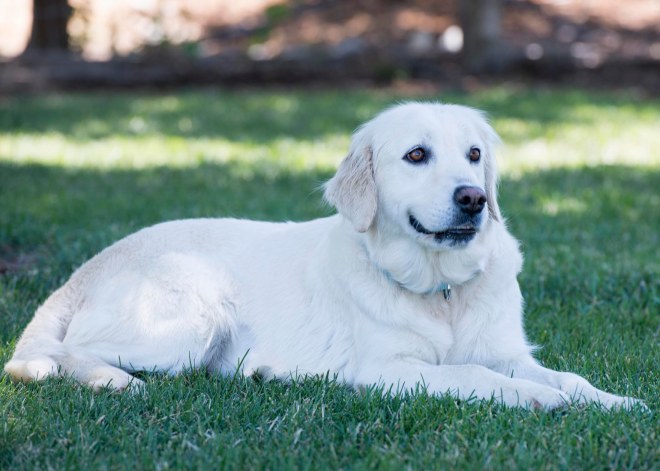 “Hope is like a road in the country; there was never a road, but when many people walk on it, the road comes into existence.” ~ Lin Yutang

“He’s going to break your heart,” they said. Buster was an emergency transfer from a local shelter. He had been found stray and unable to use his back legs. His fate, if he stayed at the shelter, was clear. Homeward Bound – on Independence Day – was his last chance.

His transport angel said he looked like he had given up. She thought he would just sleep on the long journey to safety. But after he was lifted into the van and they got underway, he used every ounce of strength he had left to crawl to her side.

He saw the Doc upon his arrival, and because we don’t just give up, started him on meds even though his legs showed significant neurological issues including the apparent loss of sensation. Carolyn and Lori set about removing the foxtails covering his belly and then put him in a dog wheelchair for a trip to the pool where he was outfitted with a doggy life jacket. He had been out for days in 100+ weather. The water would feel fine. 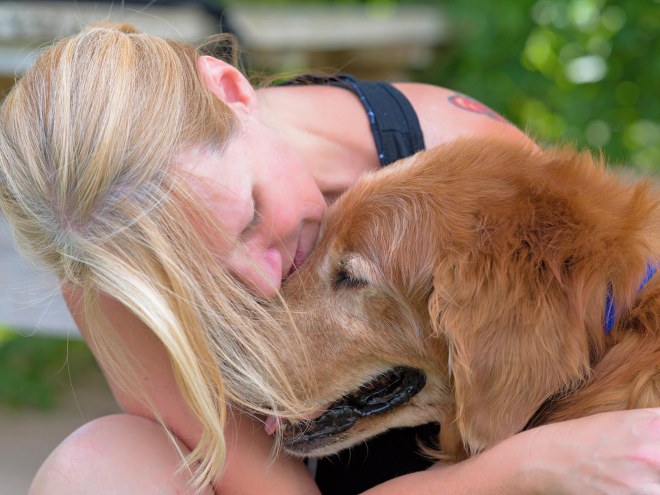 After an assisted float, an exhausted Buster was carried back to the office on a stretcher. “Office Dog” is a highly coveted designation and Buster must have been pretty happy with all the attention having booted another dog from the appointed position.

Sometimes, small miracles happen when dogs know that they are finally safe. With nearly everyone departed, Lori went to get some towels. When she turned around, look who she saw standing at the door and staring.

He walked like “a drunken sailor,” she said – but he walked!

The next day, he walked his way to the pool for another assisted swim, and then a roll in the yard. By the weekend, he was swimming life jacket-free.

We don’t know his true age, but he is a senior citizen for sure.

Lori has been out daily to get him in the pool in hopes of strengthening those back legs. Now, he only gets this “assistance” when she has put him through the paces.

Who knows what brought him to that abandoned place or what his life was like before? Who knows if this is a short-lived miracle or a hoped-for second chapter?

But he is a gentle, sweet soul; kind to other dogs; and clearly enjoying the company of loving human friends.

Buster may still break our heart someday – but not before filling it with joy.
Little miracles do happen – in safety. 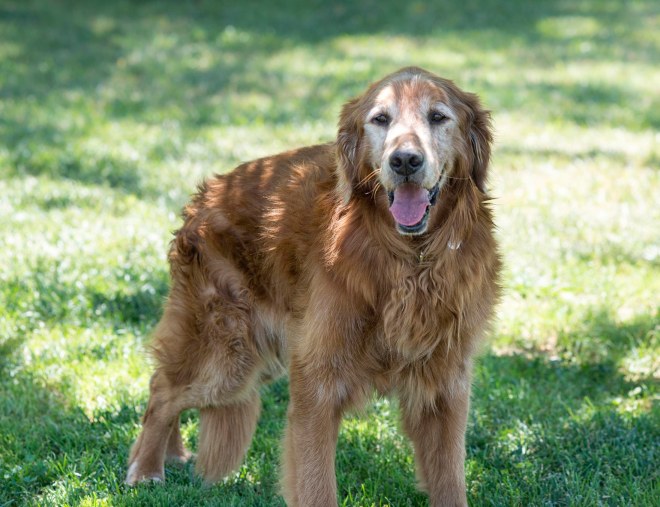 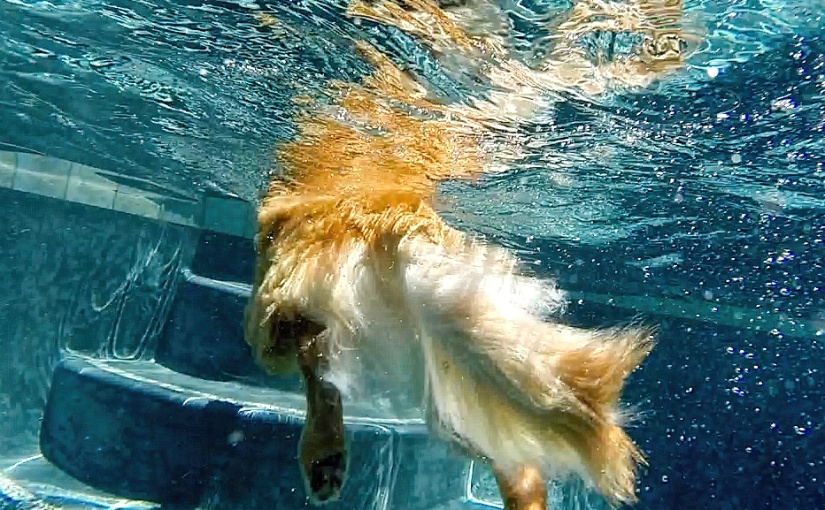 It is well over the century mark…again. My brain is too fried to write this week. So I bring you My Summer Boys. We finally have a dog in Yogi that loves to swim – and he taught Jackson, too! Who says you can’t teach an old dog new tricks??

It doesn’t matter if you were once rich, or poor…

are powerful, or petite…

Here, we are all equal dogs, and we’re all in this journey together. 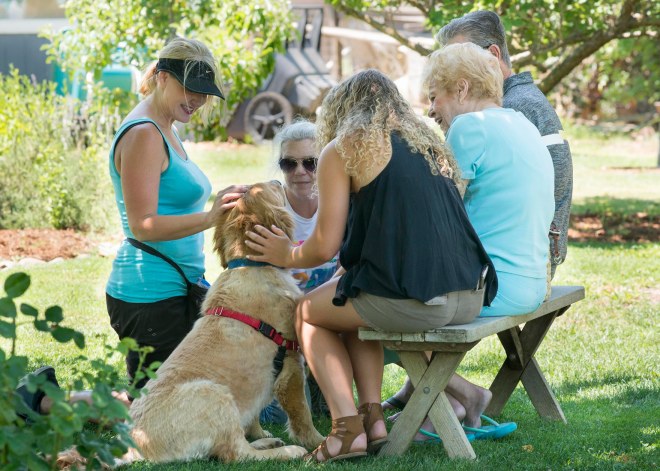 At the rescue, we don’t allow mouthy behavior.

Being rude will get you schooled. 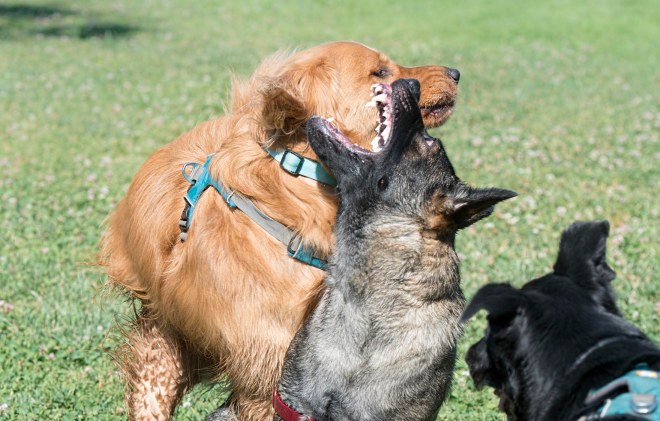 And not playing nicely with others will quickly earn you a time out. 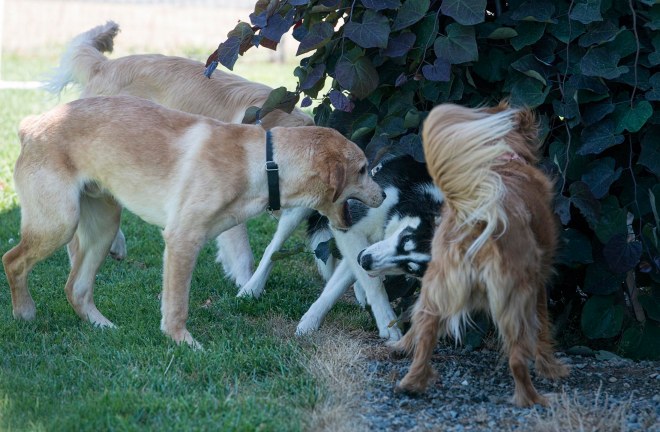 Frustration is normal, but it doesn’t give you a green light to hurt others. 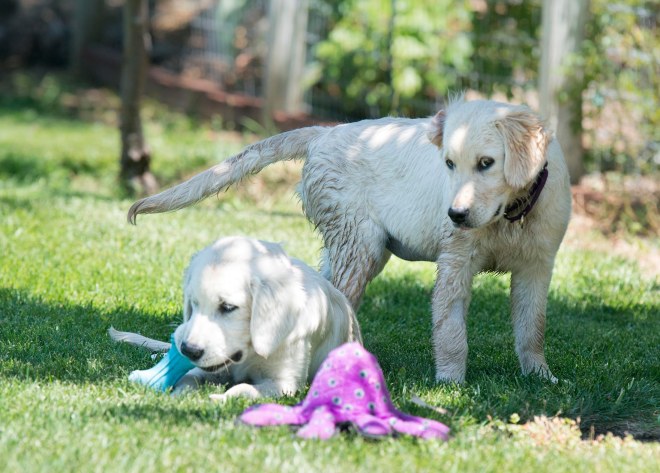 Good social skills are not just encouraged – they are expected.

Actions have consequences, but corrections are delivered with kindness.

Here, we live, work, and play according to the Golden Rule – 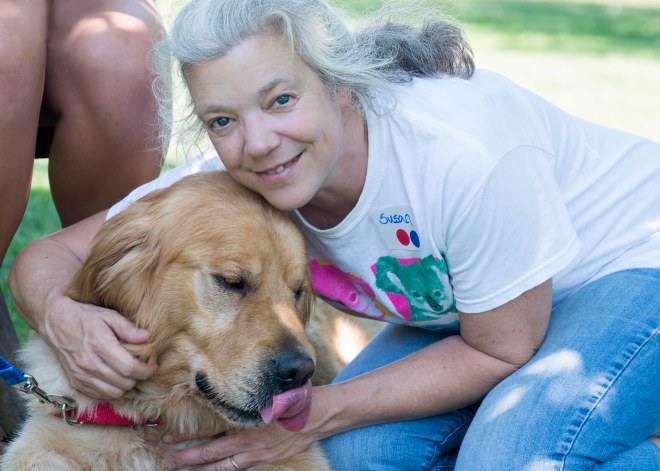 and we expect our canines to become good citizens.

In light of this week’s (continuing) headlines, I can’t help but wonder: Shouldn’t we expect the same of people, too? 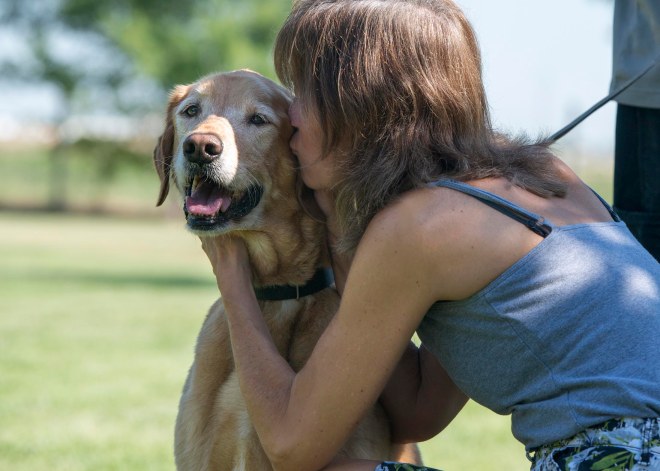