I met our mystery gardener, Sue and her dog, Brock, today in the Homeward Bound Memorial Garden. Sue served as our inspiration last fall, as she was the first to clear her garden bed – and meticulously so! She arrived today with a truckload of plants and whimsical additions to add character to the bed – only to discover that spring temperatures had fed the weeds too well.

The weather was unseasonably warm today in the Sacramento Valley, so we worked together to clear what is now “Grandma’s Flower Garden.” Great company and conversation helped us push through the  job.  Long after I gave in to the heat, Sue stayed on to complete the planting, settling in just as the day was ending, which will give them a chance to adjust in the cooler temps tonight. 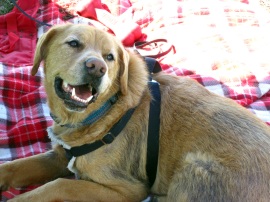 Overseeing our efforts was Sue’s dog, Brock – another Homeward Bound rescue.  Sue was drawn to Brock for his special needs. Suffering from mange as a puppy, Brock had lost most of his hair when she adopted him.  A couple of years of loving care later, his hair has come back in, but is still very short. With no trace of the classic Golden feathers, you might not take him for a Golden at first.  However, spend a few minutes playing “find it” with his toy – and it becomes abundantly clear.

People like Sue, who are drawn to special needs Goldens, make Homeward Bound Golden Retriever Rescue and Sanctuary such a special place.  They adopt, foster and care for dogs that others long ago gave up on. And they are rewarded with the unconditional love of their new best friends and four-legged family members. 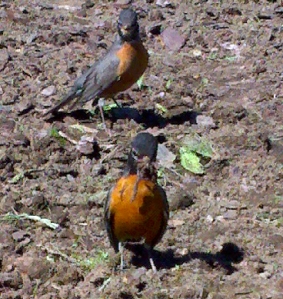 Now that the rains have largely passed and the irrigation system is in, I expect we’ll see a steady stream of volunteers planting their beds with summer color. Something tells me that Sue’s new fountain will be a gathering spot for more of her new feathered friends as well!