For those of you suffering through snow and ice, let me catch you up on our Northern California garden! 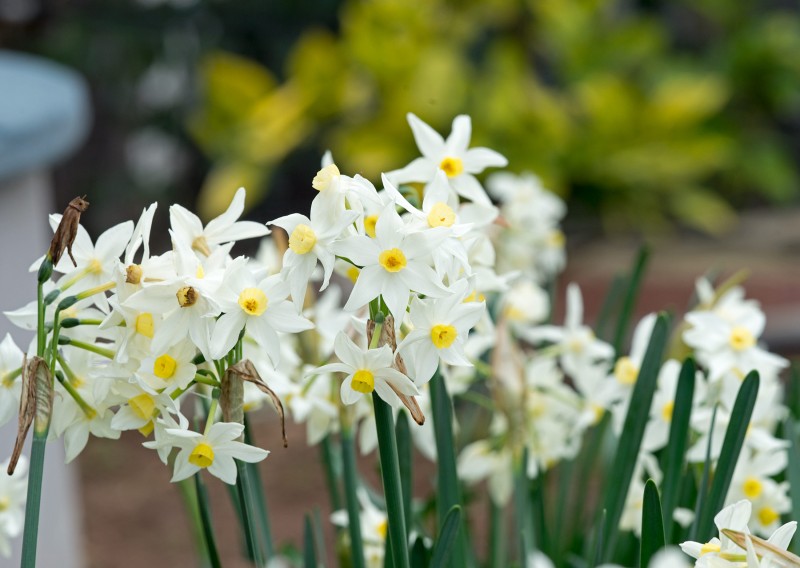 The Narcissus arrived – a bit early thanks to all that water in December (and woefully, none in January). 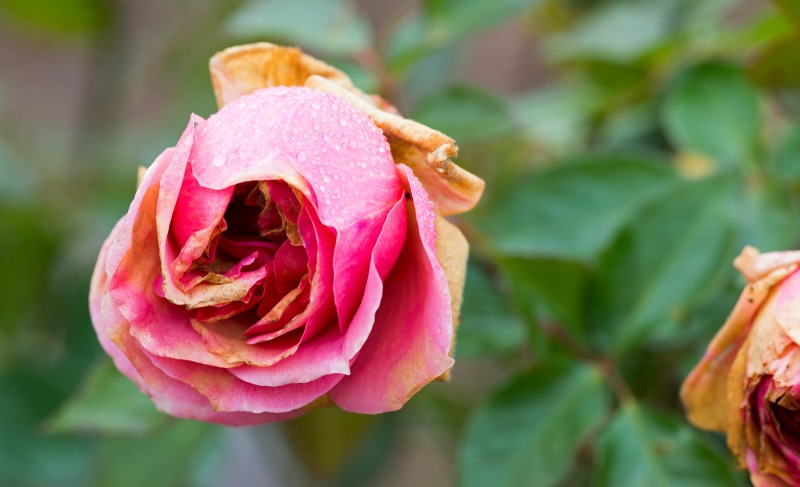 The roses took a final bow following a brief freeze… 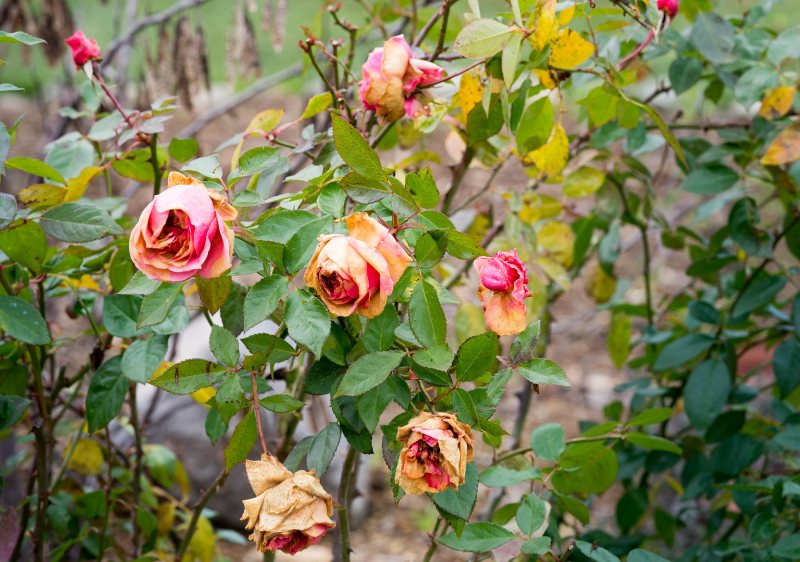 and let us know that their time had come. January is the month for pruning roses In Northern California. By my count, there are 41 of them in the garden proper with another 20 along the perimeter. To help get the job done, Ina brought a fresh recruit. Beth is a knowledgeable and focused gardener – and a great addition. 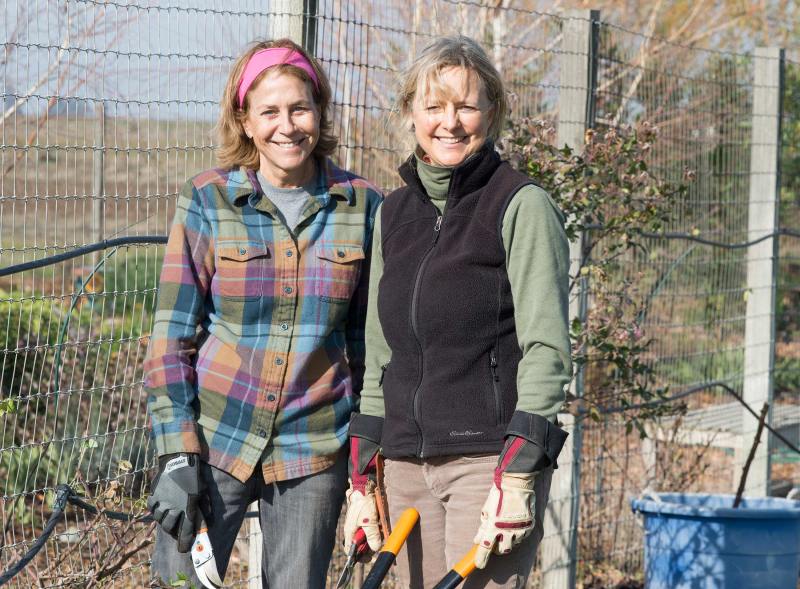 St. Francis, Patron Saint of Animals, took a serious tumble from his housing in a high wind storm. 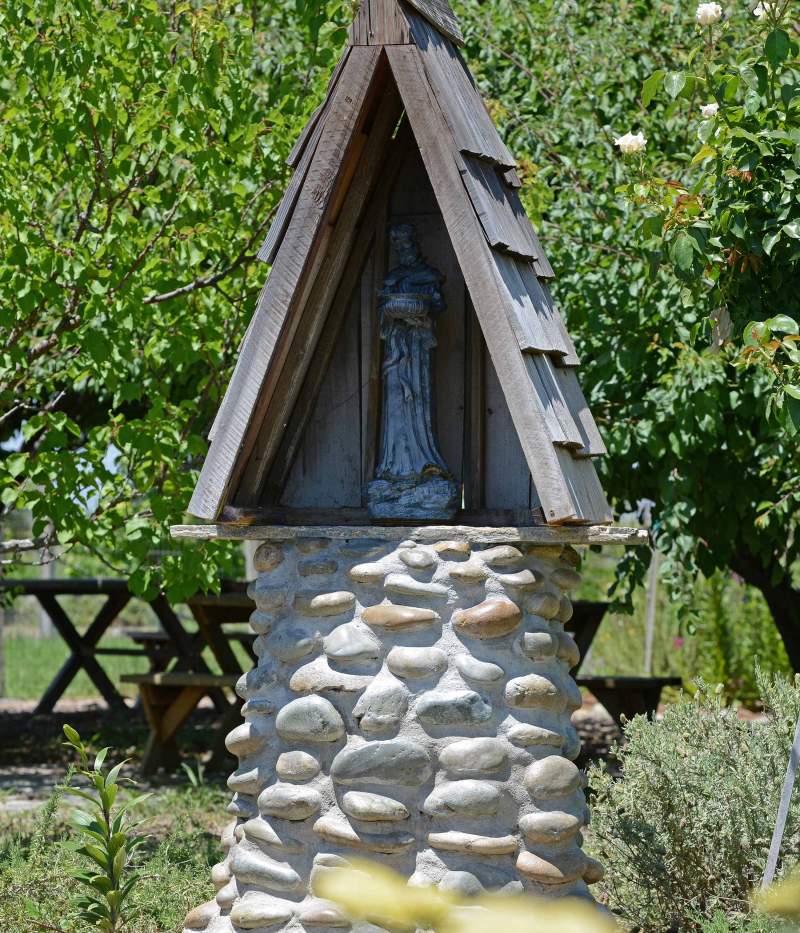 Sadly, we were unable to revive him. Given his stature, a proper burial was planned at the base of the podium. Because of conflicts with her plantings, however, Maria wanted to save space and lay him to rest with his head upright. 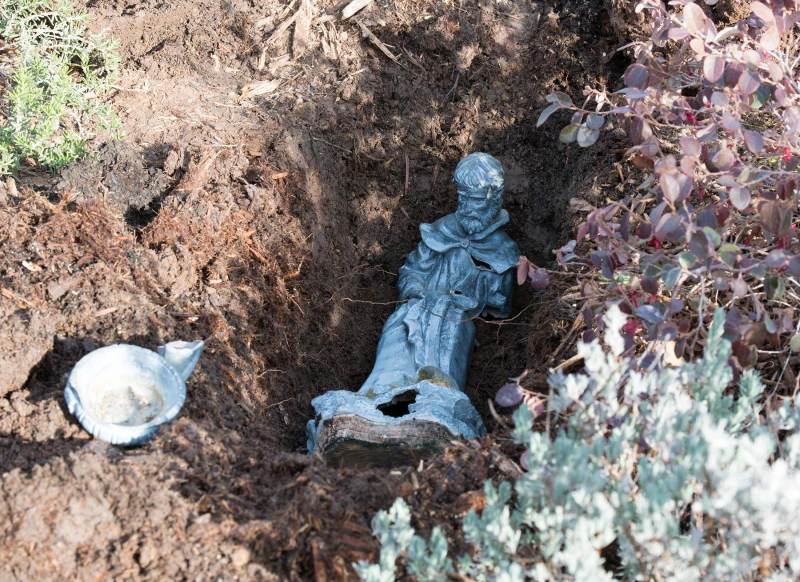 While discussing the inappropriateness of this plot, Scrappy misplaced his ball, adding insult to injury. 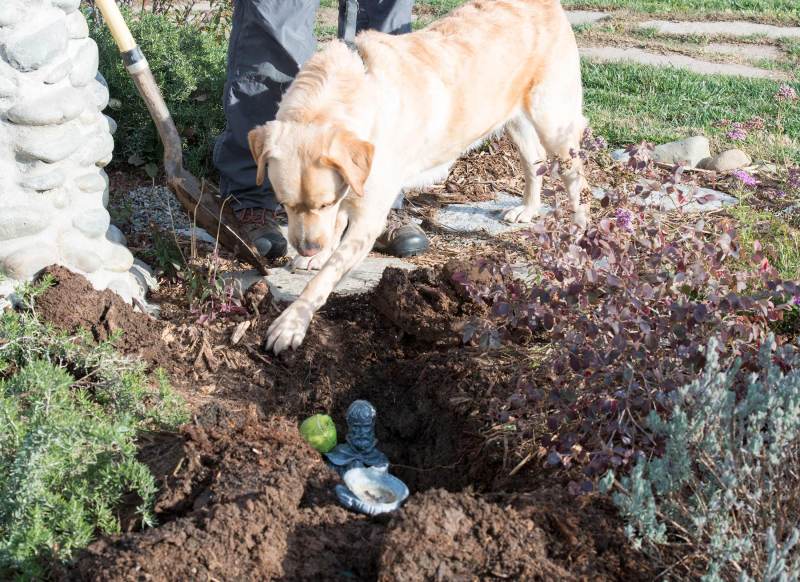 The plantings were displaced to create a proper resting place; the ball was retrieved… 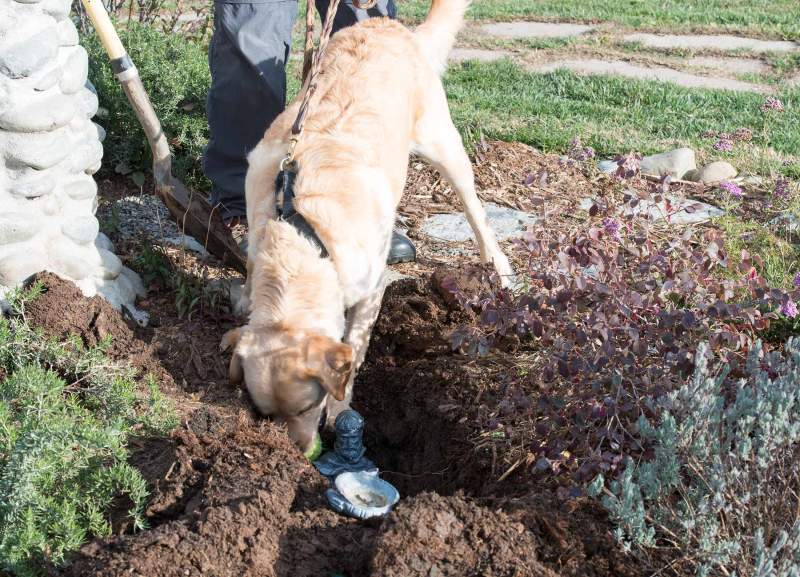 and disaster was averted. 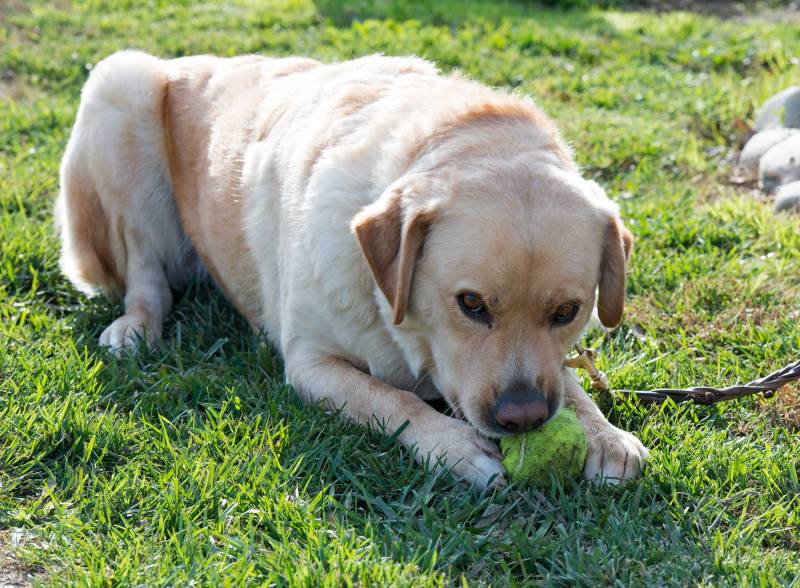 You might remember Yule – the frightened dog that Maria took home to foster. Well, that was two weeks ago, and she is not showing any signs of giving him up at this point! He has adapted really well at home and become much more confident and clearly relaxed. 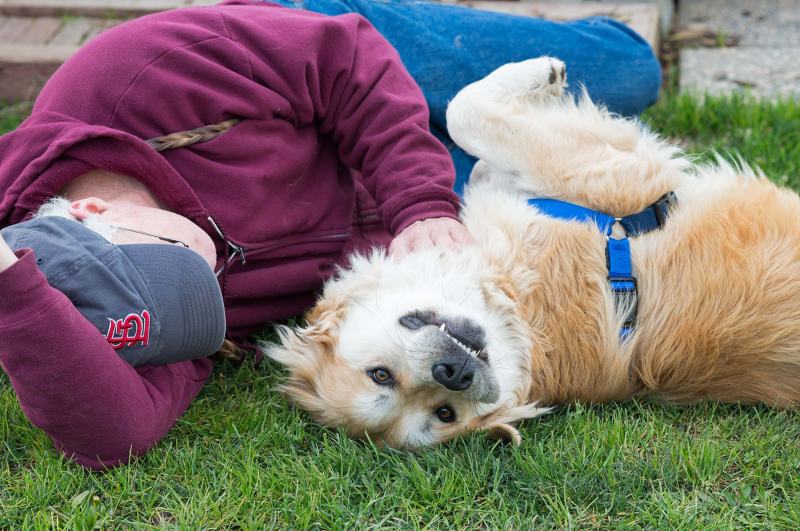 He is an excellent garden dog. Another great addition to our team. 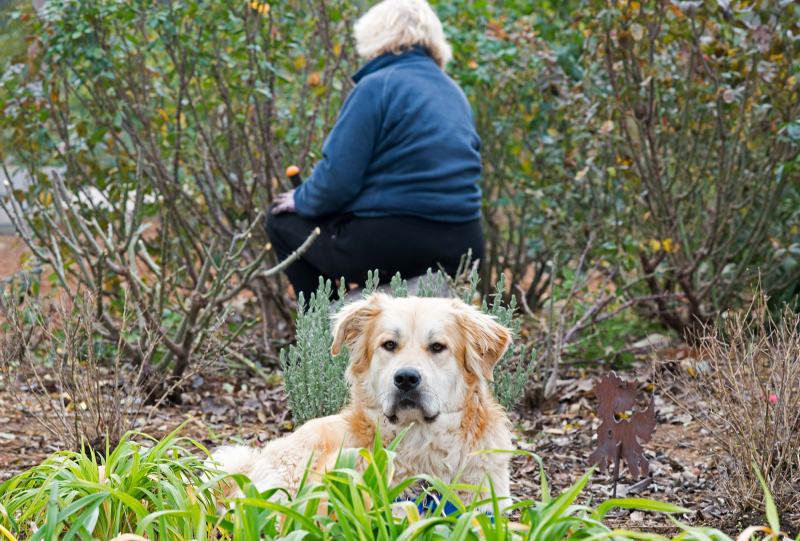 Late in the day, one of our longer term residents went home. At only six years old and gorgeous, you’d think that Ernie had everything going for him. 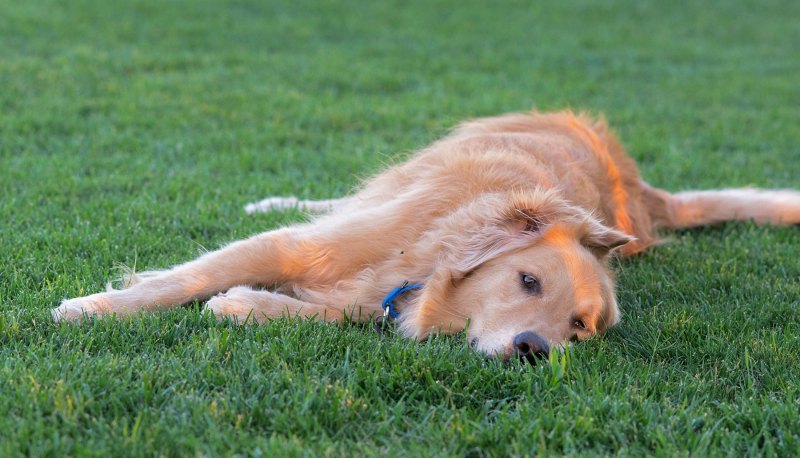 But he is one of those very independent dogs that doesn’t connect right way to people. Not to mention that his manners were less than perfect. He went home for a time with our dog photographer/whisperer, Rob, to work on those. Today, it paid off. His new people spent a lot of time with him and learning about him. Their “going home” photo (thanks Rob) reflects a match that was worth the wait. 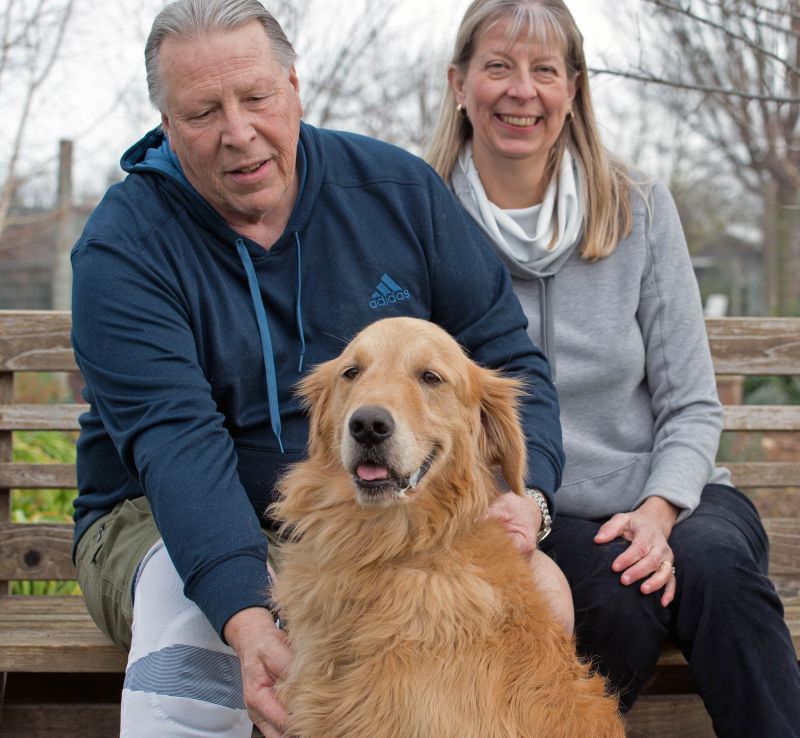