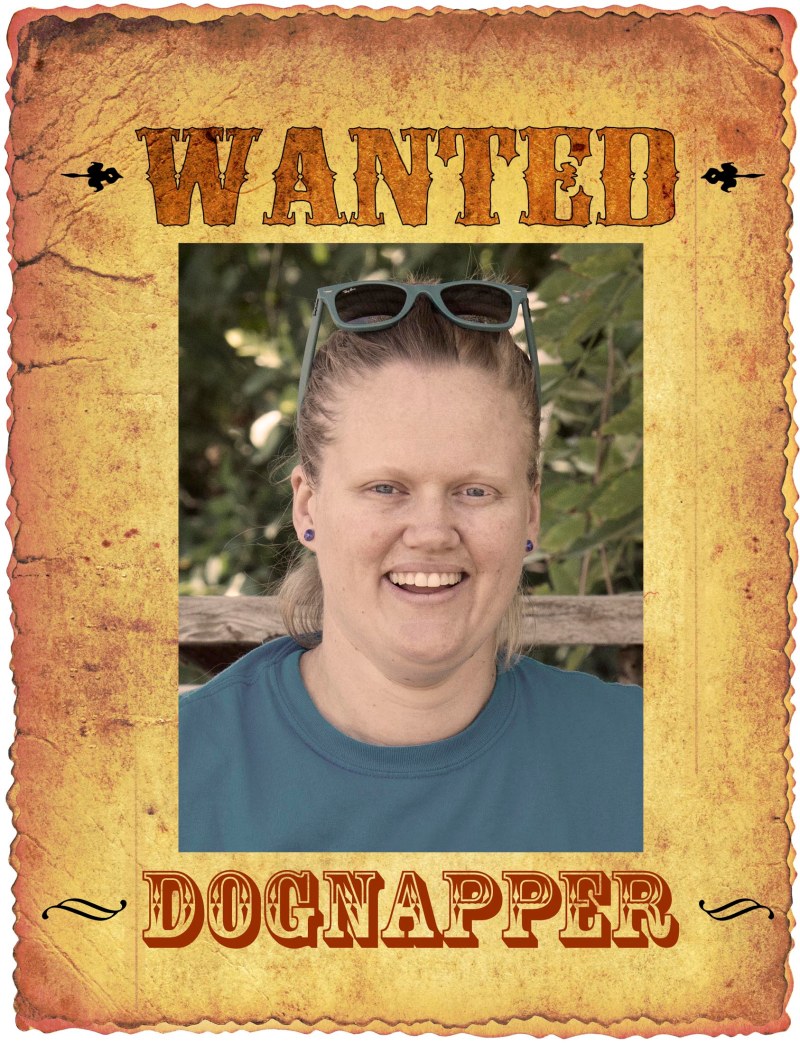 Height: 5’5”; Eyes: Blue; Distinguishing Marks: Pretty. Bright smile. Infectious laugh. Frequently covered in garden dirt.
Modus operandi: Lurks around rescue office, the temporary home of the sweetest old or rehabbing dogs. Lies in wait. Lures pups to her with baby talk and treats. Snatches them up to add to her growing collection. Known to target any dog liked by our Treasurer.
Criminal Record: Sought in the disappearance of Jenni, Snowy, Ginger and Royce.
Caution: Should be considered armed (with cookies) and dangerous (to office dog lovers).

Meet Anna. The most recent addition to the volunteer gardeners – a front, we’re sure. As a long-time Homeward Bound supporter and well-known dognapper, I suspect she was just looking for a cover. 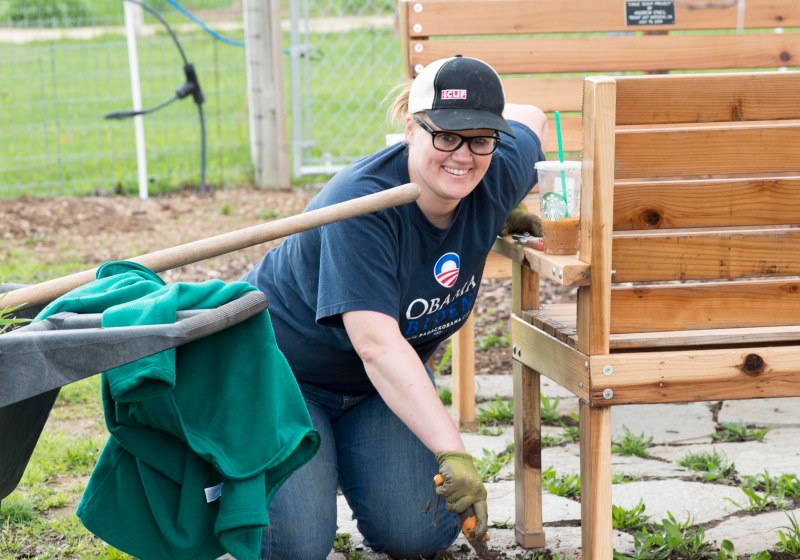 Before I met Anna, she was already legend for stealing Jenni from president’s office – striking before anyone could even list Jenni as available. You want to be careful not to make off with the president’s favorites too often. By the time I met Anna, she had switched her tactics. In the Fall of 2013, she targeted Summer, a recuperating office dog and a favorite of our treasurer, Judy. 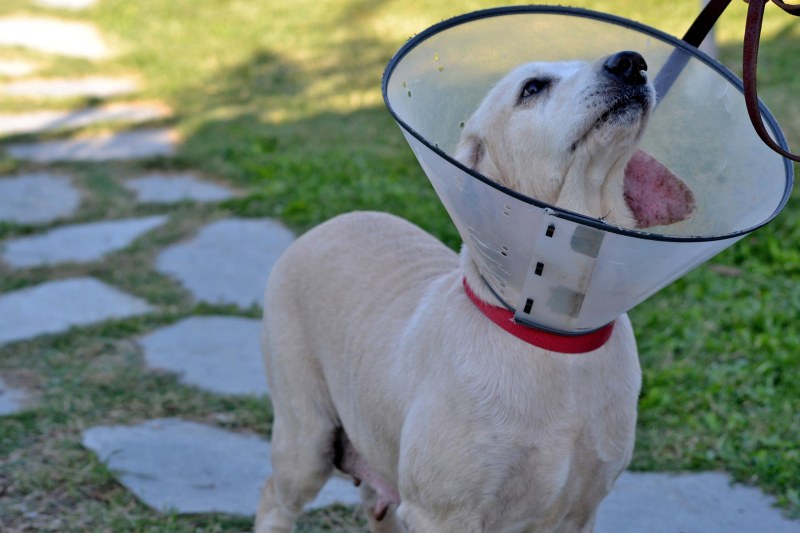 Anna changed her name to Snowy thinking that would mask the evidence, and invited her home with Jenni. 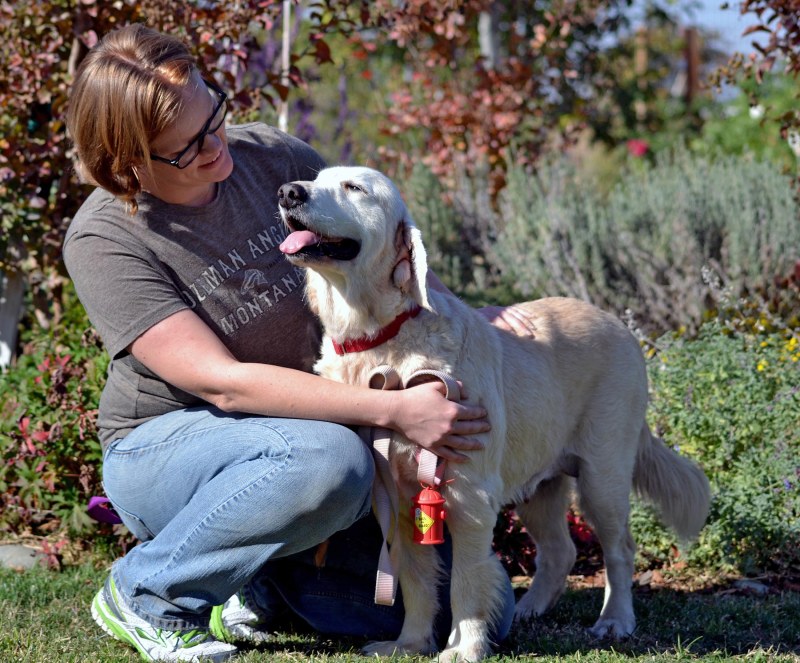 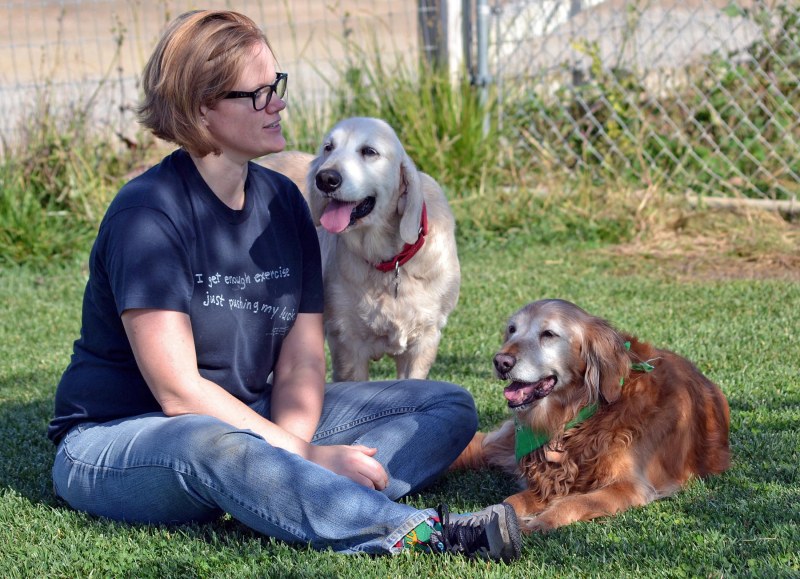 Judy thought Ginger was safe, tucked away in the corner of her office. Not so! 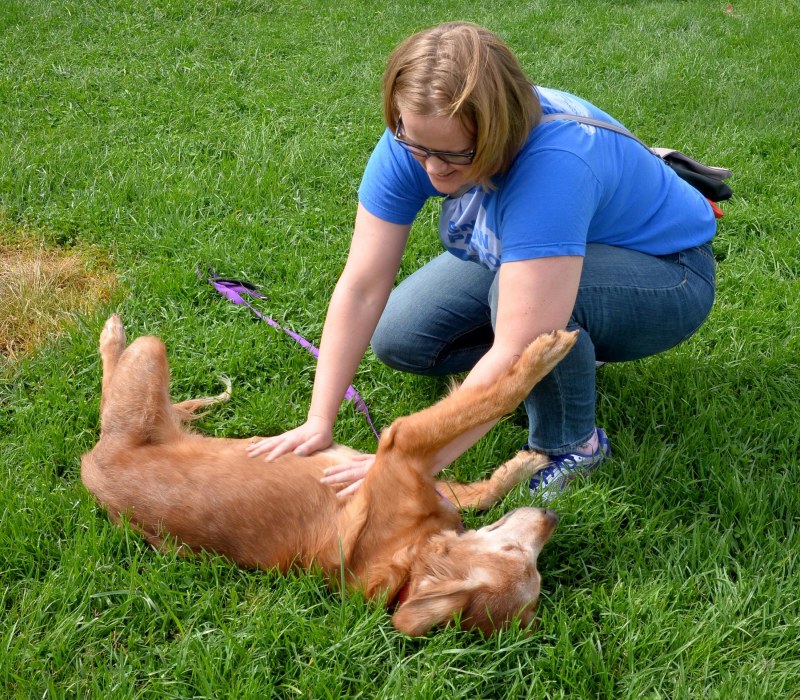 Anna swooped in and stole her right from under her nose less than a year later. Ginger joined Jenni and Snowy and off they went. 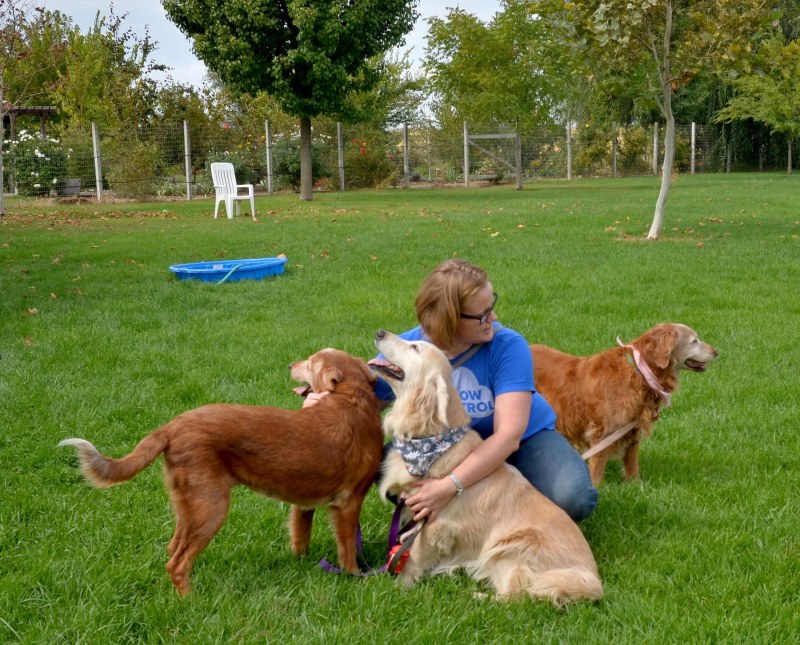 Now, she’s done it again. To obscure her true motives, she arrives in the early morning under the guise of gardening. Shortly after her arrival in the garden, Anna sneaks away and quietly prowls the office looking for her next mark. 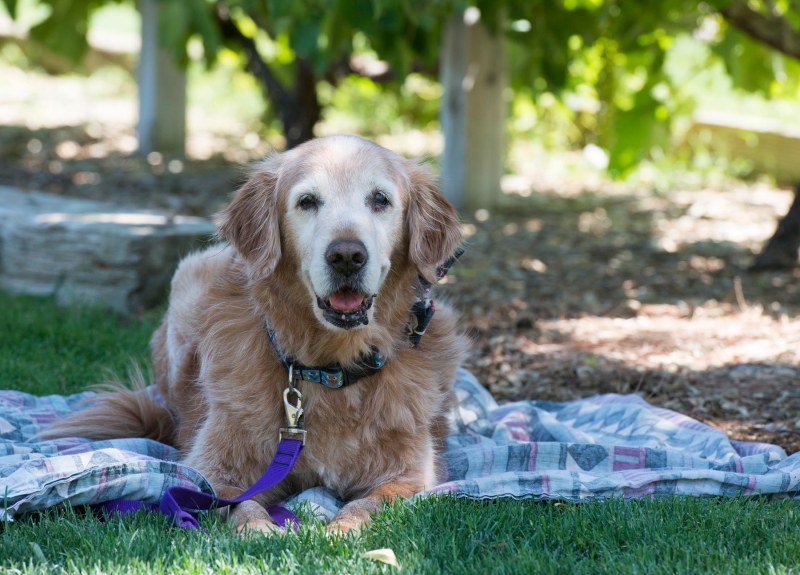 16-year-old Royce – yet another of Judy’s favorites – did not stand a chance! Having spent his life as a service dog, he is remarkably still full of life and pep. Upon his arrival, Judy quickly nabbed him to be her new office dog. Big mistake. He may not hear or see well, but there’s nothing wrong with his sniffer. With a pocket full of cookies – and clearly, limited loyalty – it didn’t take much for Anna to win him over. 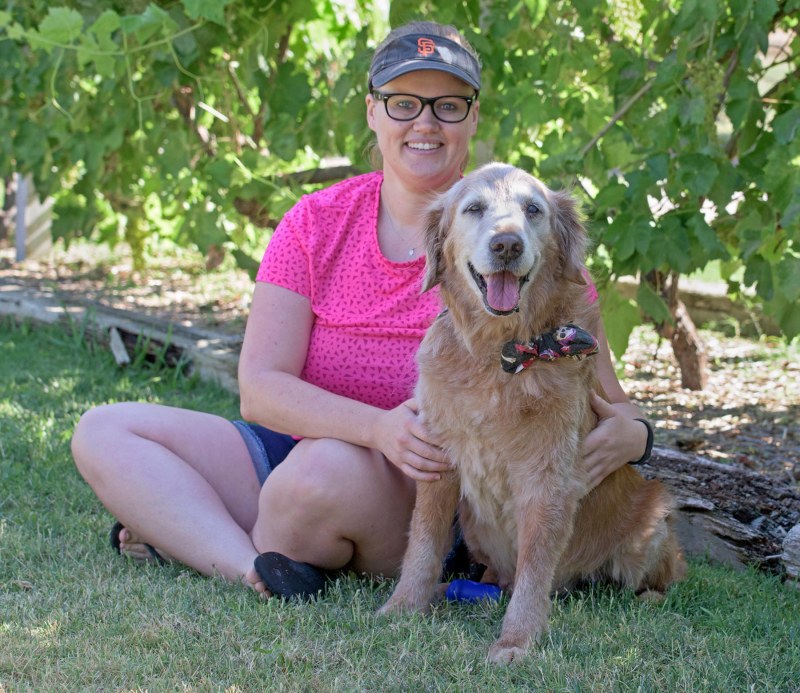 Judy never saw it coming. A couple of weeks ago, Royce went home with Anna, Jenni and Snowy. Ginger is with them in spirit, if not in body. 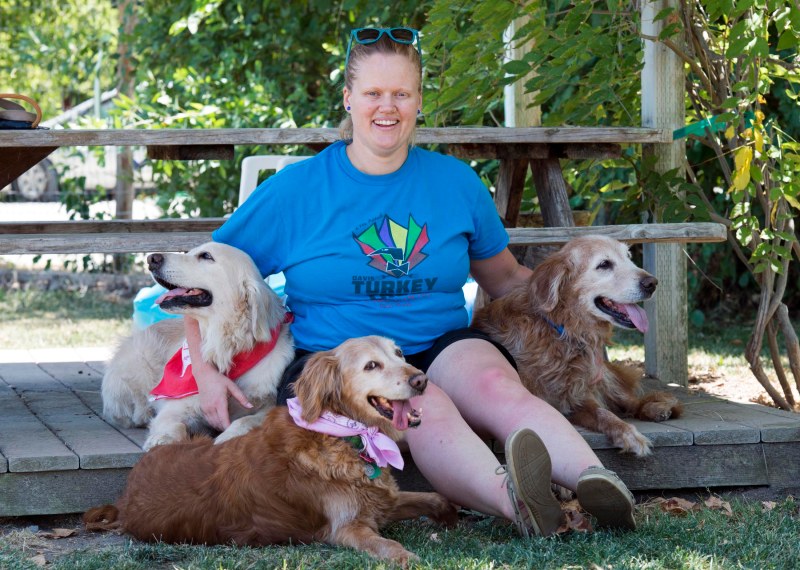 This weekend, she disguised Royce as a gardening dog – flagrantly parading him under Judy’s nose. 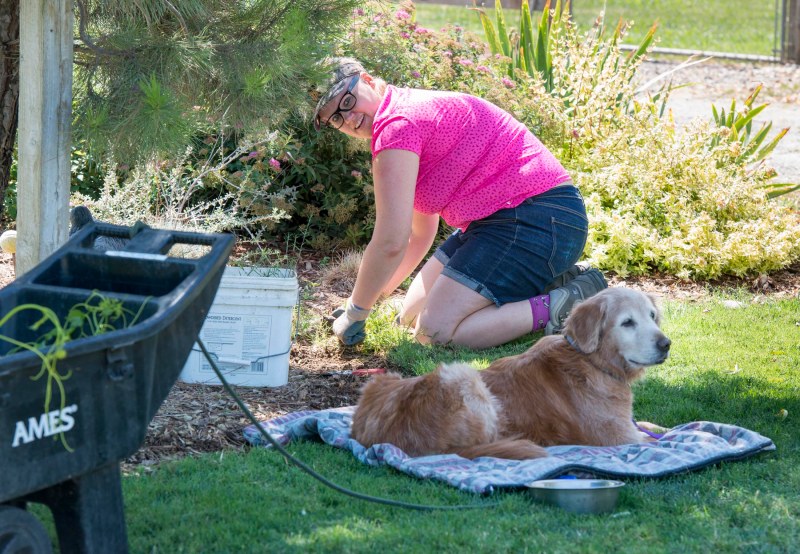 Why is this known dog thief allowed to continue in her misdeeds? Ask any of her spoiled rotten dogs. They’ll vouch for her. 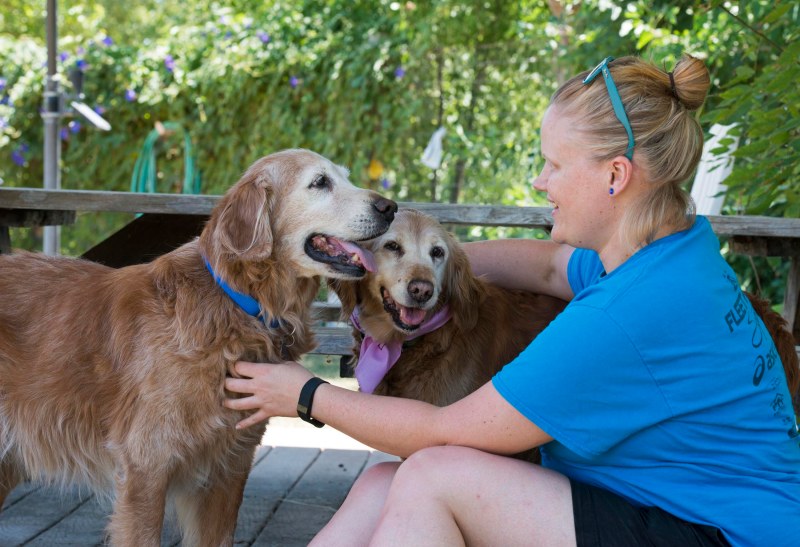 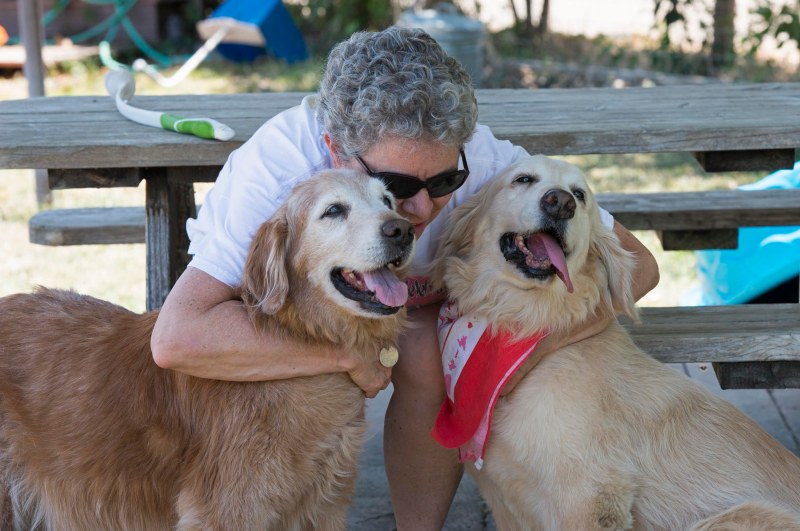