Sometimes the universe has a twisted sense of timing. We received a request for urgent help a couple of weeks ago. While a Golden lover was picking up her new puppy half the country away, she got word that her senior heart dog, Sully, was failing – and fast. She rushed home with the still unnamed puppy in tow to receive the prognosis we all dread: she had some time – but little of it. And while her boy could go home for hospice care, an eight-week-old bundle of puppy energy was not exactly what the doctor ordered.

At a time that is supposed to be filled with new puppy joy, there was only overwhelming sadness, chaos, and guilt. Puppies that have recently left their litter need reassurance, time, and patience. But her heart and focus were understandably with Sully, ensuring his comfort and trying to make the most of the time they had left together. Emotionally and physically exhausted, she knew that the best thing for all would be to find a short-term foster for the puppy. My fellow Homeward Bound volunteer connected us, and two hours later, the little fuzz ball was home with my Yogi and Jackson. 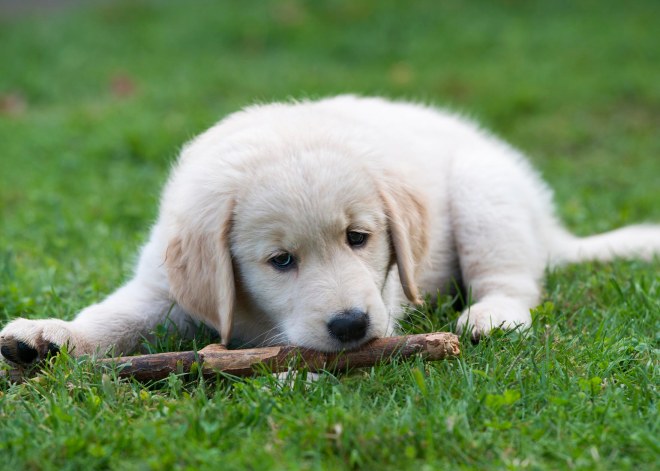 I had been warned that she was a bit “vocal” (read “screamer”) when left alone. I guessed that a large part of that was leaving the litter. My boys were just what she needed to make a successful transition – the role that her big brother Sully was planned to fill for her. 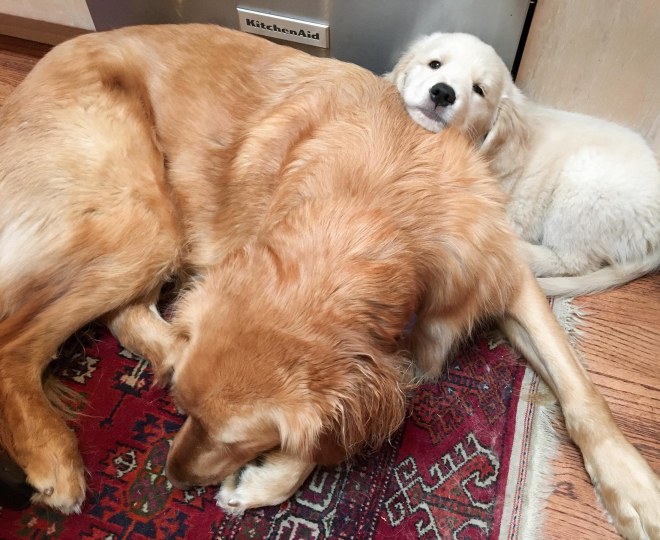 Yogi, as usual, was her instant playmate – while Jackson adopted his more aloof stance.

She dished out her tiny terror in unrelenting waves on Yogi,

but she looked up to Jackson. When it came time to snuggle, it was Jackson she sought out. With a mixture of disgust and resignation, he reluctantly surrendered to her charm.

Mom stayed in constant touch, and along the way little girl acquired a name: Shaye.

Rather than test her night-time vocal cords, we set up a crate in the bedroom – a fostering first for our temporary puppy residents. The bedroom is usually reserved for Yogi and Jackson as their safe and quiet zone. But I value my sleep, so the boys were sacrificed. As long as Shaye could see them both nearby, she went right in, settled – and slept through the night. What kind of puppy is this?

We quickly saw what a special girl she was – and despite our best intentions – she crawled right into our hearts.

In so many ways, she reminded me and my husband of our sweet Bella as a pup. A total joy spreader. Maybe the universe knew that her new mom would be in extra need of that.

Mom got the time she needed to say ‘goodbye’ to Sully – and we got an extra special dose of puppy love.
This parting was just a little harder than the others. Come and visit anytime, sweet Shaye.

23 thoughts on “Puppy Love On Loan”