The failing 40-year-old fence had to be taken down before it fell down. Shared with our 92-year-old neighbor of 20 years, it took some convincing, first – and then it took some major clearing.

While our side was relatively clear of vegetation, her side had become a jungle of tangled, massive ivy that had swallowed what was once one of the most treasured and admired gardens in the neighborhood. 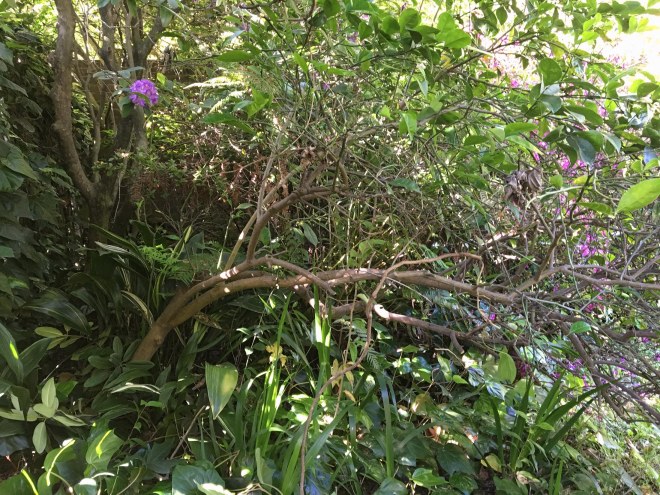 I’m now sure exactly when her husband passed; I knew that she had already been living alone for at least ten years before we moved in two decades ago. The garden was her pride and joy. She would spend hours tending to the magnificent azaleas, rhododendrons, ferns and hidden treasures. This is the view of one of them from our side. 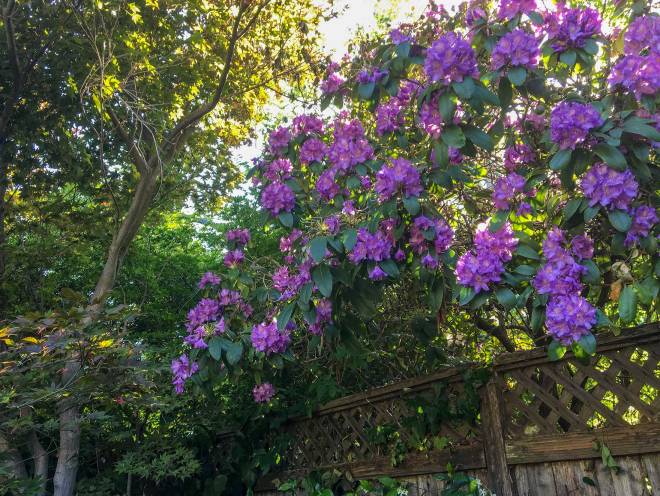 Until about 10 years ago, she would bring in gardeners to do major clearing, pruning and tending. But as time went on, that ceased and the ivy began swallowing up the garden and the fence with it. 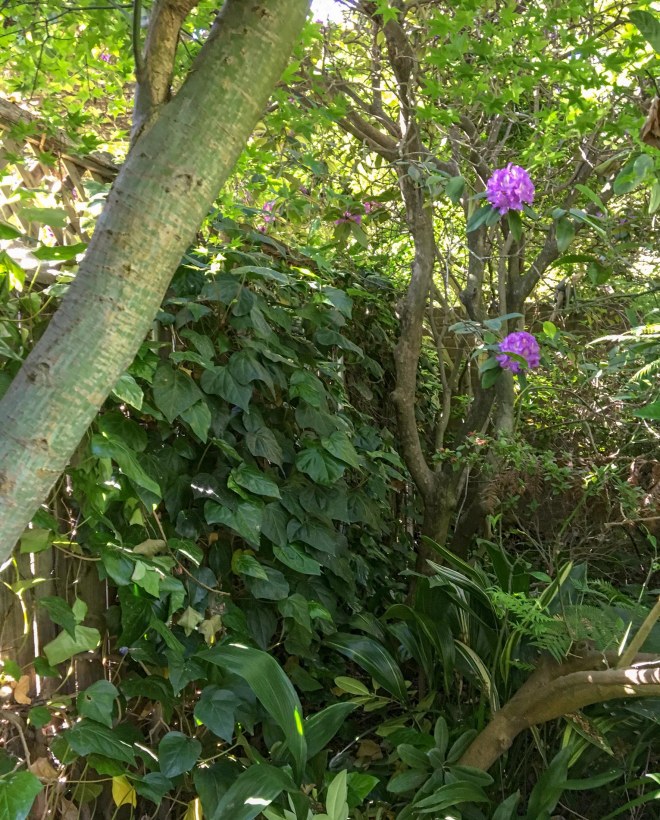 When our Yogi threatened to bounce it to the ground in his hunt for critters, it was time to address it. 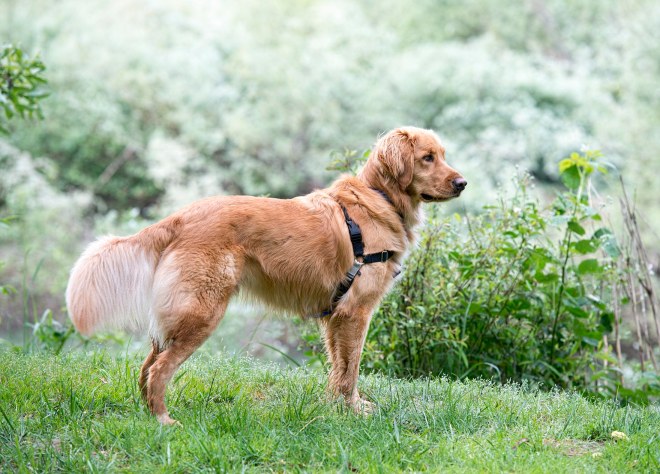 And just about the only way she was going to allow it to be cleared for the replacement was if someone she trusted did it. So the task fell to me.

She is of surprisingly good, but frail, physical health. Especially considering that she has smoked her whole life and had heart bypass surgery 10 years ago. But the years of living alone have taken their toll. While she can recount stories from decades ago, her short-term memory now fails her. If I work when it is cool in the morning, she keeps watch from her patio, calling me over every few minutes to ask the same question again and again. I am happy to abide her, but found that my most productive time is after she has “gone up” for the night…at 3PM.

Part of the offer was to do a kindness to a long-time neighbor on a fixed budget; part was to see if I could recover her lost gem – something I knew she would appreciate and a gardening challenge for me. I got more than I bargained for. 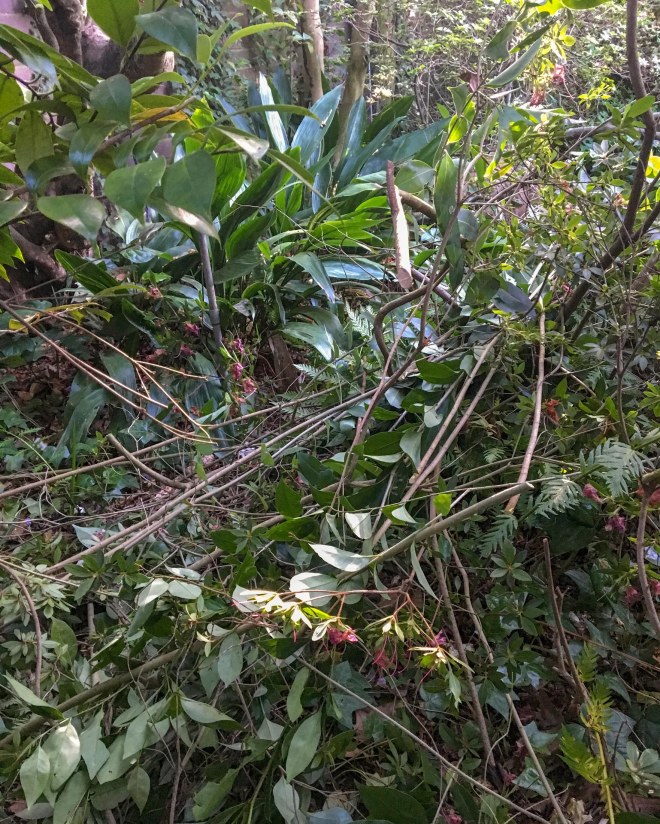 The first task was to ensure the required clearance for the fence work so it could get underway. It began with providing a clearing from which I could branch off left and right, and a way out when returning all of the cleared vegetation – some alive, some very much dead.

I uncovered mature trees that were never planted – they just burst their containers and found ground for their roots;

a tree limb, the weight of which was the only thing holding an entire section of fence in place; 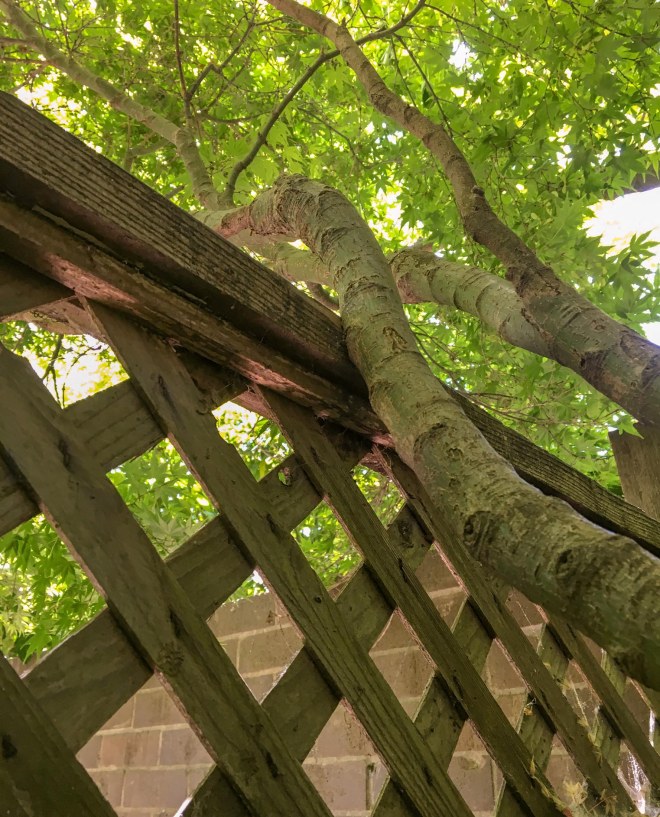 and ivy trunks as thick as trees. 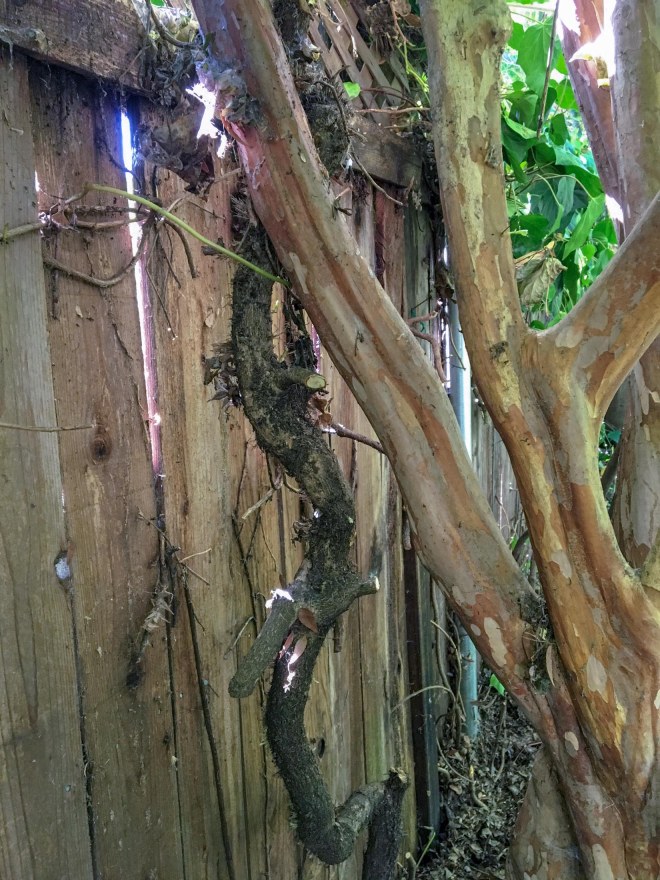 So far, three towering piles have been taken away. And that is from a single small section of the yard required for the fence project.

While the fence was able to be replaced and Yogi secured, the project of reclaiming the garden will continue as time allows. I am careful not to prune too much from her treasured shrubs and trees, but as the light can now enter, the structure and beauty begin to show through again.

The lost world, rediscovered. And with it, a treasured memory will hopefully be restored.

13 thoughts on “The Lost World”