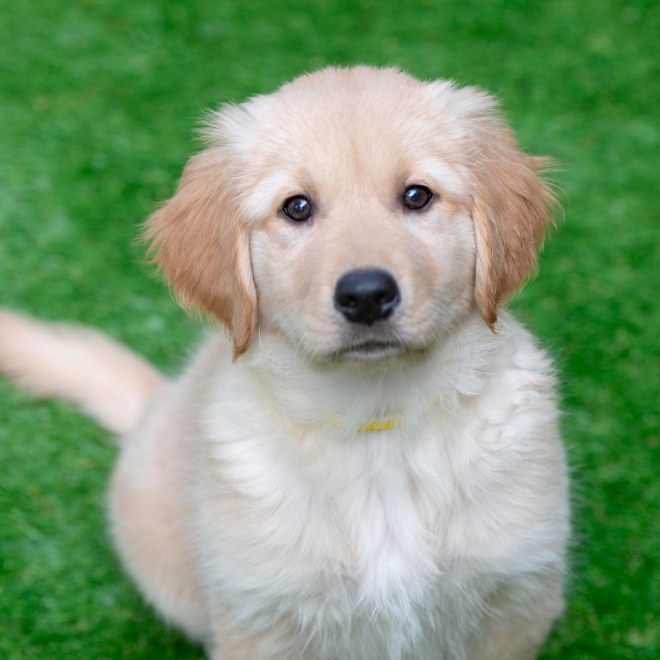 Three weeks ago, I brought home the three tiny tots I showed you recently: little Rose, heartbreaker Ty, and tomboy Nutmeg (aka Meggie).

They are the reason I have been absent. They were tinier than they should have been with liquid poo, poor appetites and throwing up. Poor little babies did not feel good. 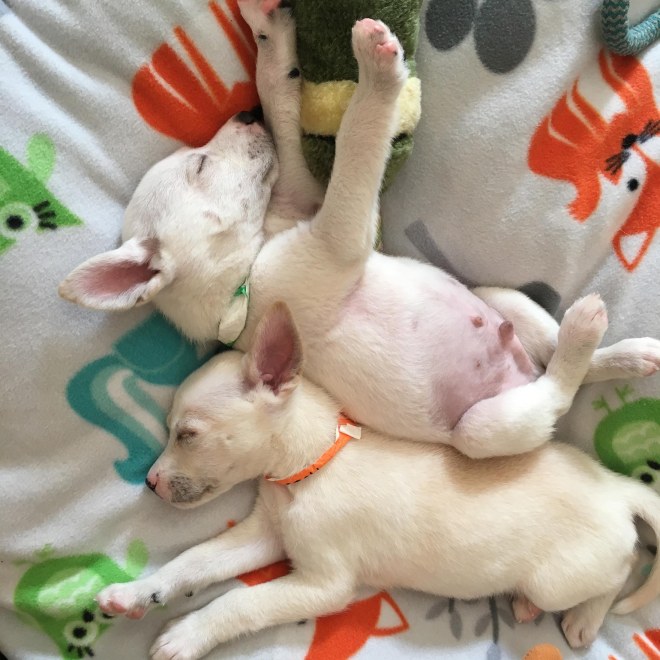 We typically suspect some kind of parasite and began treatment. At the same time, I started to gradually transition them from the canned food that they arrived with to our puppy kibble. You always want to transition dogs to new food slowly to avoid upset tummies and icky poo (like it could get worse!). They showed a little improvement, but the gains should have been faster on the meds and their fecal samples came up clear. At only three pounds, the situation was particularly concerning for little Rose. 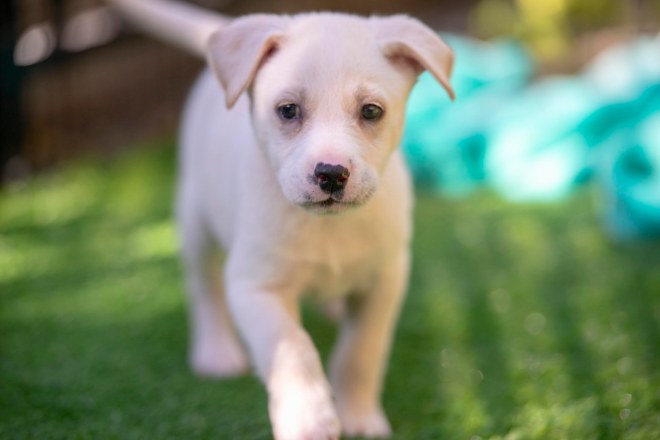 And then: the recall notice. The Science Diet canned puppy food that accompanied them had been recalled for excessive vitamin D. The symptoms: everything they were experiencing. The gradual transition went out the window and the canned food went in the trash. They immediately began feeling and eating better. A week later, they had nearly doubled in weight.

Which was a very good thing.

Because they needed all the heft and energy they could muster for the newest arrival: 9 week old Anna. 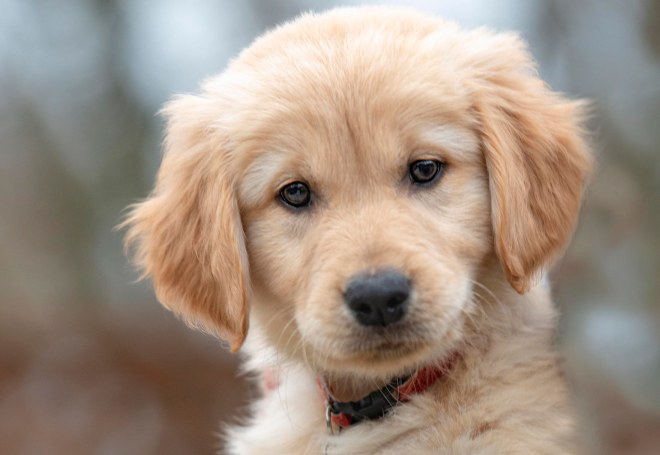 I received the photo of her curled up alone in the corner of a pen looking pathetic with the message: “She wants to come and play.”

There once was a time when I was forbidden to take home more than two puppies because they worried it would be too much. I guess those days are done.

Camp Yogi is a maze of puppy pens and gates. Our stone floors are a lifesaver, especially given the bladder infection that Anna arrived with (all better now). 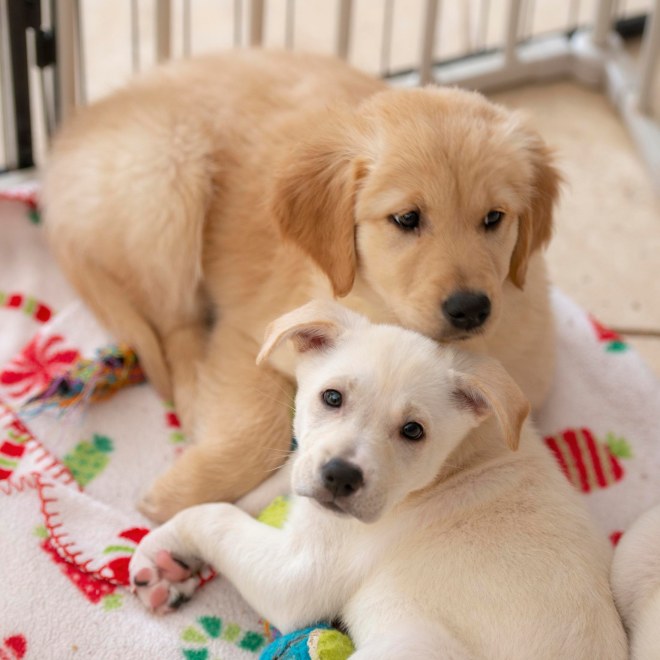 Yogi is the absolute most patient puppy teacher ever,

and my husband is a saint. Truth be told, he loves them. At least twice a day he lays down with them and allows himself to be trampled, toppled and mauled. It is their favorite activity. 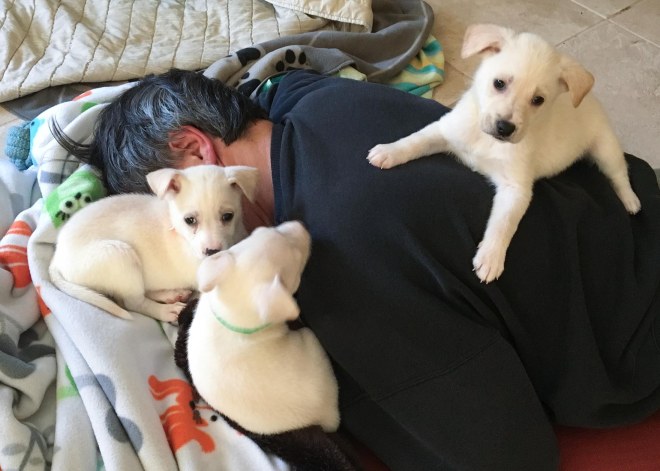 Meanwhile, I have learned that you can get a lot done when you go to bed at midnight and get up at 5AM. P.S. Chasing after puppies while trying to get your work done cures nighttime insomnia.

Despite the size difference, they play well together. Every once in a while the three gang up on the one just to show them the power of tiny tots. 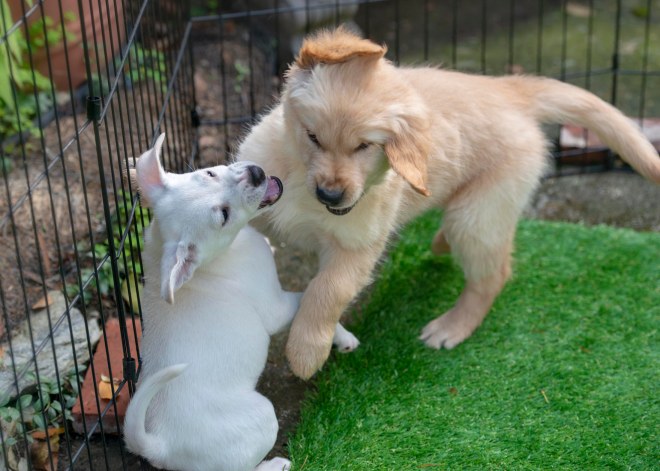 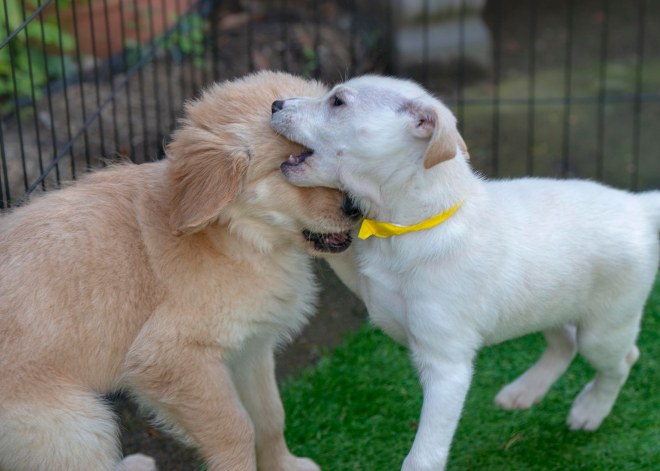 But everyone gives as good as they get, and at the end of every brawl, you will find them curled up together. 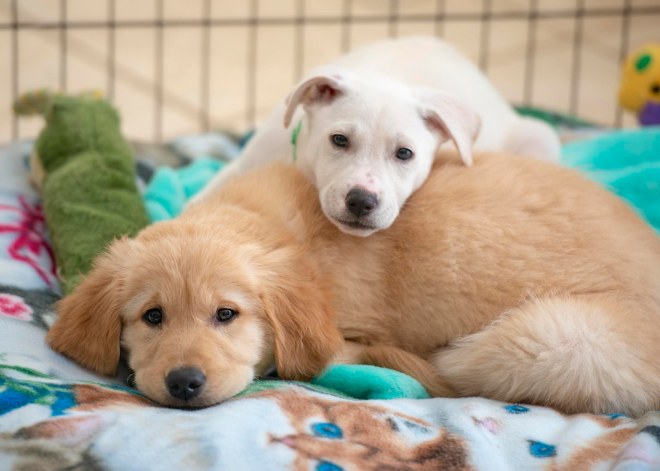 People say “I’m so jealous.” But when offered the opportunity to foster little ones, they usually vanish. The truth is that puppies are a lot of work. 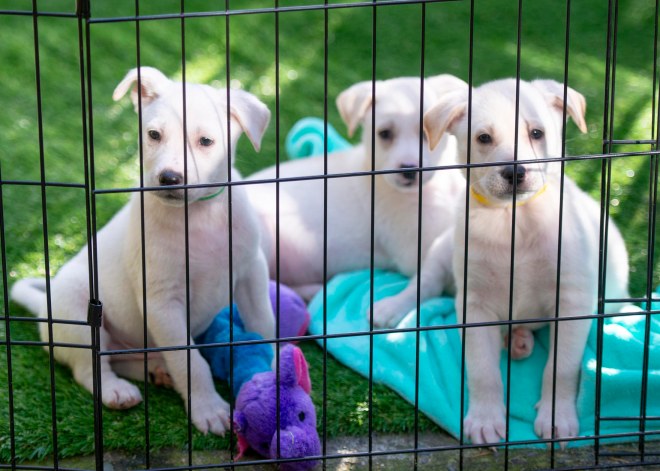 They wreck havoc on your home and schedule, sleep is scarce, and the laundry is endless! In the summer, I am OK with them being at the rescue because they have so much room to run and play in their huge puppy yard. But in the cold and wet of winter, there’s no place I would rather they be.

These weeks are critical in their socialization. The first 3-4 months of a puppy’s life lays the foundation for their growing up ahead. So their time together, with us, and with our older dogs helps to set them up for success in safety and comfort.

Little Meg is home. Anna was scooped up today. And while our other two little Golden imposters may need a little extra help to get home from a big dog rescue, before I know it, they will be gone and our house will be quiet (and a bit sad) again.

I never saw myself as a little dog person. 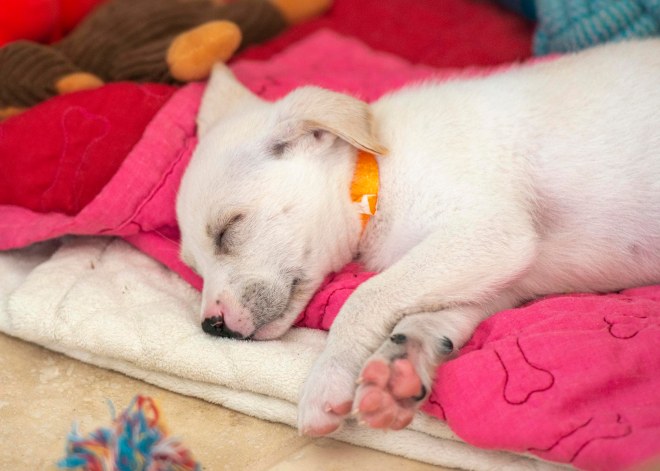 There is a reason why we say that rescued is our favorite breed.

12 thoughts on “And Then There Were…Four?”